The Wind, the Chariot, and Wamuu, Part 5 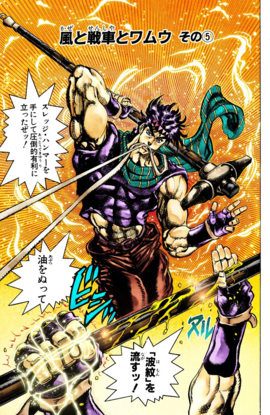 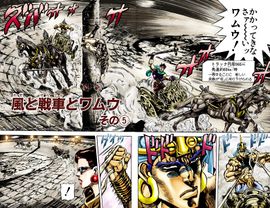 Kaze to Sensha to Wamū Sono 5

The Wind, the Chariot, and Wamuu, Part 5 (風と戦車とワムウ その⑤, Kaze to Sensha to Wamū Sono 5), originally The Pillar and the Hammer! (柱とハンマー！, Hashira to Hanmā!) in the WSJ release, is the fifty-fifth chapter of Battle Tendency and the ninety-ninth chapter of the JoJo's Bizarre Adventure manga.

Joseph coats his newly obtained War Hammer in oil so that it can conduct the Ripple, and drives his chariot closer to Wamuu to fight him. But before JoJo can attack, Wamuu grabs the pillar from which the hammer was hung, and uses that as a weapon. In a single blow, Wamuu destroys Joseph's chariot, with Joseph barely escaping the hit. Wamuu charges forward, planning on running over him with his chariot. If JoJo dodges left or right Wamuu will use his Divine Sandstorm. JoJo grabs the war hammer, rushes towards the horses, and catapults himself upward by hitting the harness with the hammer. JoJo lands on the horses and prepares to attack Wamuu, but Wamuu is nowhere to be seen. At that moment, from out of the horse, a hand reaches out and grabs JoJo's leg.