Gravity of the New Moon 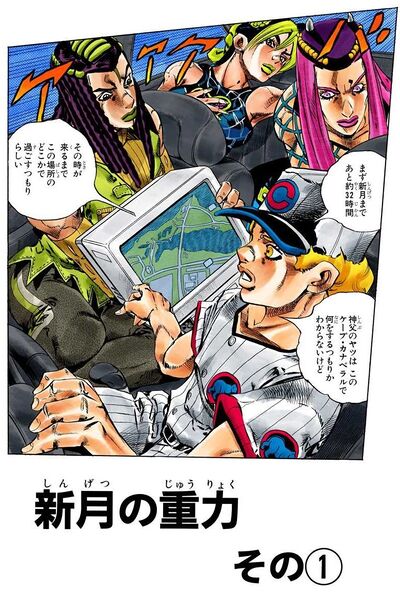 Gravity of the New Moon (新月の重力, Shingetsu no Jūryoku) is the twenty-fourth story arc in Stone Ocean.

It narrates Pucci's awakening of C-Moon at Cape Canaveral.

Jolyne, Ermes, Emporio, and Anasui are driving to Cape Canaveral. Meanwhile, Pucci is at the Kennedy Space Center, when suddenly objects around him are being pulled sideways.

Thirty-two hours before the New Moon, the party drives off to Cape Canaveral in pursuit of Pucci. While Emporio deduces the priest's probable location, they discuss whether to wait for The Speedwagon Foundation or to head straight into battle with Pucci. Suddenly, the car engine stops functioning and they discover that the gravity is shifting around Cape Canaveral. They hurriedly exit the car but not before Ermes is hit by a debris and falls.

Determined to stop Pucci from attaining "heaven", Jolyne, Anasui, and Emporio head towards the visitor center where Pucci is sheltered in. However, Pucci soon nears the ideal conditions and has awakened a new power. The three do not find Pucci but are instead attacked by the Stand C-Moon, which had already taken a humanoid form that evolved from the Green Baby.[1]