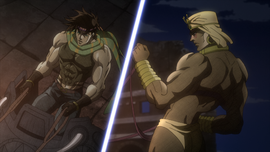 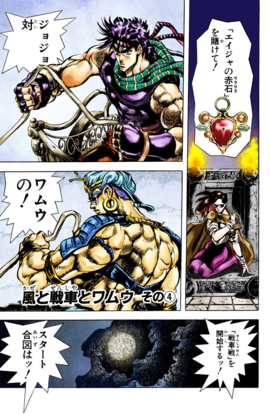 The Wind, the Chariot, and Wamuu (風と戦車とワムウ, Kaze to Sensha to Wamū) is the eleventh story arc in Battle Tendency.

In one of the chambers, Wamuu recovers from his wounds and sees Joseph and Lisa Lisa enter the room together. Lisa Lisa warns Joseph that Wamuu is not alone, but while Joseph only thinks of Kars, she senses dozens of different breaths. The two Ripple masters realizes that a score of Vampires are hanging from the ceiling ready to attack. Outnumbered, Lisa Lisa successfully bluffs Kars into thinking that she's left the Super Aja with a timed bomb that will destroy it if she and Joseph do no return. Lisa Lisa then offers a simpler solution to this stalemate, one which Wamuu secretly approves: two one-on-one matches to decide who gets the stone. Kars reluctantly accepts, keeping Lisa Lisa as a hostage while letting Joseph leave to get the stone and meet them at Skeleton Heel Stone at midnight.

Joseph leaves and takes Messina with him. When he retrieves the Red Stone in Lisa Lisa's baggage, he sees a photo of Erina, Speedwagon and Straizo holding a baby from 50 years ago. Arriving at the location, Joseph learns that the baby is Lisa Lisa, who Erina saved on the day that Jonathan Joestar died. But before Joseph can get more answers he learns that he has to challenge Wamuu to a chariot race. The winner will be the one to kill his opponent or complete three laps around the arena, each lap providing weapons for the racers' use when they reach a pillar on which two Vampires are tasked with giving said weapons.

Moments before the race begins, Joseph secretly scatters rubble under Wamuu's chariot to get a headstart and grab a warhammer which he coats with oil to conduct the Ripple. Unfazed, Wamuu simply grabs the Pillar and smashes Joseph's chariot. Finding himself on the ground, Joseph is about to be run over by Wamuu. Against all expectations, he uses the hammer to catapult himself past the vampire horses and lands on their back. Wamuu, having hidden inside the horses, tries to use the Holy Sandstorm on Joseph; shockingly the point-blank Sandstorm doesn't kill Joseph who is still propelled into his smashed chariot. Moreover, Wamuu's arms are torn apart; Joseph has tied the arms with the chariot's reins reinforced with the Ripple, turning the technique against its user.

The humiliating shock leaves Wamuu speechless as both combatants reach the second lap when they will have to use crossbows. However, by gouging out his eyes as a "mental switch", the Pillar Man regains his focus and battle lust and compensates by revealing his horn with which he will sense the movements of the air. Joseph grabs the larger crossbow but realizes that he's not strong enough to bend the bow. Meanwhile, Wamuu grabs the smaller one and uses it to obliterate the head of one of Joseph's horses. This forces Joseph to ride his remaining Vampire Horse and attempt to hide his presence from Wamuu via the bonfire in the middle of the track. It only gives Wamuu the opportunity to precisely guess Joseph's location, and the Pillar Man shoots, rebounding the steel bullets against the walls of the arena, and strikes Joseph in the kidneys. The Ripple user falls off his horse and Wamuu approaches to finish him.

Joseph realizes that his bow is now bent and tries to shoot at Wamuu, but overcome by pain Joseph misses completely. Wamuu reaches Joseph, who begins to beg for his life, disappointing the Pillar Man. Suddenly, Wamuu is hit from behind by a steel ball: Joseph has used the same rebound shot; the larger crossbow and the use of the Ripple make it so the projectile shoots through Wamuu's chest.

With his body failing and unable to use his Divine Sandstorm, Wamuu attempts a futile double kick, and Joseph destroys his legs. Cornered, Wamuu manages to immobilize Joseph and pin him against the center wall of the arena, then reveals his ultimate technique: the Atmospheric Rift. Special tubes in his body suck off the surrounding air and propel it at high speed through the horn, creating an air blade. Both combatant's lives are on the line since Joseph is unable to flee, but Wamuu's technique is destroying his body. Fortunately before Wamuu can find him, Joseph throws a molotov cocktail and Caesar's headband which he's lit on fire with the fire at the center of the arena. When Wamuu cuts down both projectiles, he sucks the gas and the flaming shreds inside him, resulting in an explosion that destroys his whole body from the inside.