From JoJo's Bizarre Encyclopedia - JoJo Wiki
(Redirected from The Land of Promises: Sugar Mountain)
Jump to navigation Jump to search

The Land of Promises: Sugar Mountain 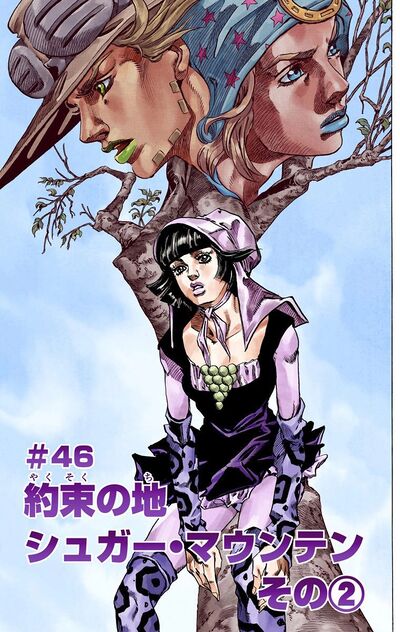 It narrates Johnny and Gyro's predicament as they take a test from Sugar Mountain and are pursued by Eleven Men.

At the beginning of the 6th stage, Gyro wakes up covered in snow. As Johnny discovers new properties of Tusk ACT2 and resume their conversation about the Corpse, Gyro notices that 11 horses are nearing them, with unnatural synchronization. Gyro notices that the Steel Ball he's used to detect the horses has disappeared. A young girl appears before them, with the Steel Ball in hand, and runs off. Johnny and Gyro follow her up to a massive tree in which the girl, named Sugar Mountain, has made home. Sugar Mountain propose them various items the duo made fall into various ponds earlier with a more precious version of each such as gems in stead of the Steel Ball. Gyro understands the meaning of these propositions and manages to seize the Ears plus various precious good. However before they leave, Sugar Mountain warns the horse racers that they have to spend or exchange fairly everything they have before the sun sets lest they are absorbed into the tree and will serve as guardians, liberating the next imprisoned people which happen to be Sugar Mountain's parents. Gyro and Johnny decide to head to the city, and acquire the Right Arm.

In the city the duo has difficulty spending everything, and the amount of goods they receive only increases with time. Besides the Eleven Men are closing on them. Gyro decides to spend everything in a shady casino. Their game is interrupted by the 11 men who initiate a shootout inside the casino. They all wield the same stand which allows them to transfer themselves between each other's bodies. Johnny's ten nails and Gyro's two steel balls aren't enough to overcome all Eleven, but Gyro gets both out of their predicament by paying the gangsters they were playing against for protection, which costs them all of their money and goods.

The sun sets and Gyro suddenly transforms himself into branches, Johnny realizes they haven't given the Corpse Parts away. Johnny hesitates between his friend and the Corpse he's coveted for so long, but gives the Corpse parts to the last of the Eleven Men for a bottle of wine, spending everything. Sugar Mountain and her parents prepare to leave the tree, she notes that Johnny and Gyro have proven themselves worthy of the Corpse, having been able to give up everything, even the most precious goods they had. Defeated, Gyro and Johnny have a toast to the next Corpse part and victory.[1]