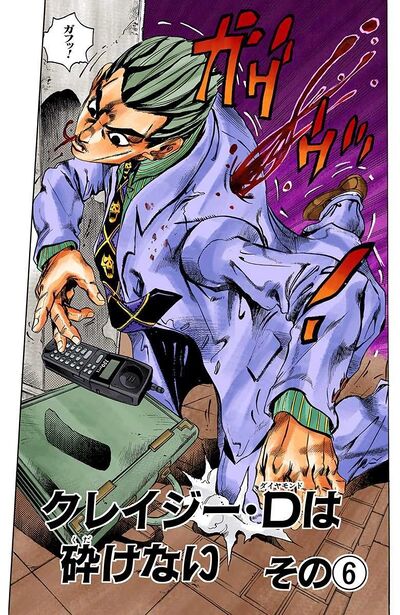 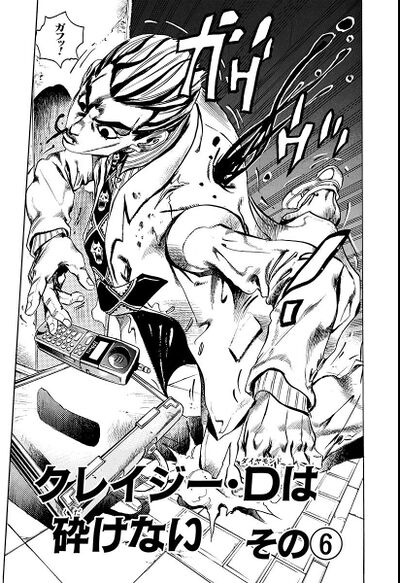 Crazy Diamond Is Unbreakable, Part 6 (クレイジー・は砕けない その⑥, Kureijī Daiyamondo wa Kudakenai Sono 6), originally The Final Blow! (最後の一撃！, Saigo no Ichigeki!) in the WSJ release, is the one hundred sixty-eighth chapter of Diamond is Unbreakable and the four hundred thirty-third chapter of the JoJo's Bizarre Adventure manga.

Now wounded by the glass shard, Kira fears the fate that awaited him if he entered the house. However, he assures himself that the air bomb from Killer Queen wounded Josuke far worse. Kira fires another bigger bomb into the house to finish off Josuke. Josuke stops as well, deciding to fling another glass shard at Kira. He asks Hayato to take a lighter in his pocket and light the wood debris on fire. Hayato informs Josuke that the smoke won't help them spot the bomb, but Josuke assures him it'll help with finding something else. Josuke uses the flames from the lighter and wonders if rather than seeing their movements, Kira is hearing them instead.

Josuke wonders who Kira was talking to outside on his cell phone and deduces it could only be one person. Josuke lights Hayato's chest pocket on fire, causing Yoshihiro to reveal himself. Josuke snatches Yoshihiro's cell phone as the air bomb passes into his body. Josuke, imitating Yoshihiro's voice, continues to give Kira coordinates—leading directly to his own father. Josuke tells Kira to detonate the bomb, causing Yoshihiro to scream out before dying in the massive explosion. Kira happily believes he's finally killed Josuke, only for Josuke to reveal over the phone to Kira that he only succeeded in sending his father back into the afterlife.