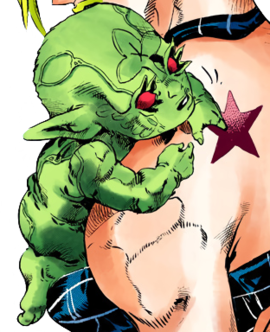 The Green Baby is a unique creature made of DIO's bone and a multitude of souls. Its birth represents an advanced stage in the plan agreed between DIO and Enrico Pucci, as outlined in DIO's diary. The baby is a Stand User, and is automatically protected by Green, Green Grass of Home.

The Green Baby resembles a gremlin

in appearance, with two lines going down either side of its cranium. It has large, pointy ears and green skin, which is patterned with leaf shapes. It has eyes that resemble seeds. It also has what appears to be a leaf-shaped mark on its forehead and the Joestar Birthmark on its back.

The Green Baby seems largely innocent, like a human baby. It is curious and shows interest in Jolyne's birthmark. 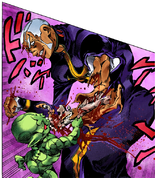