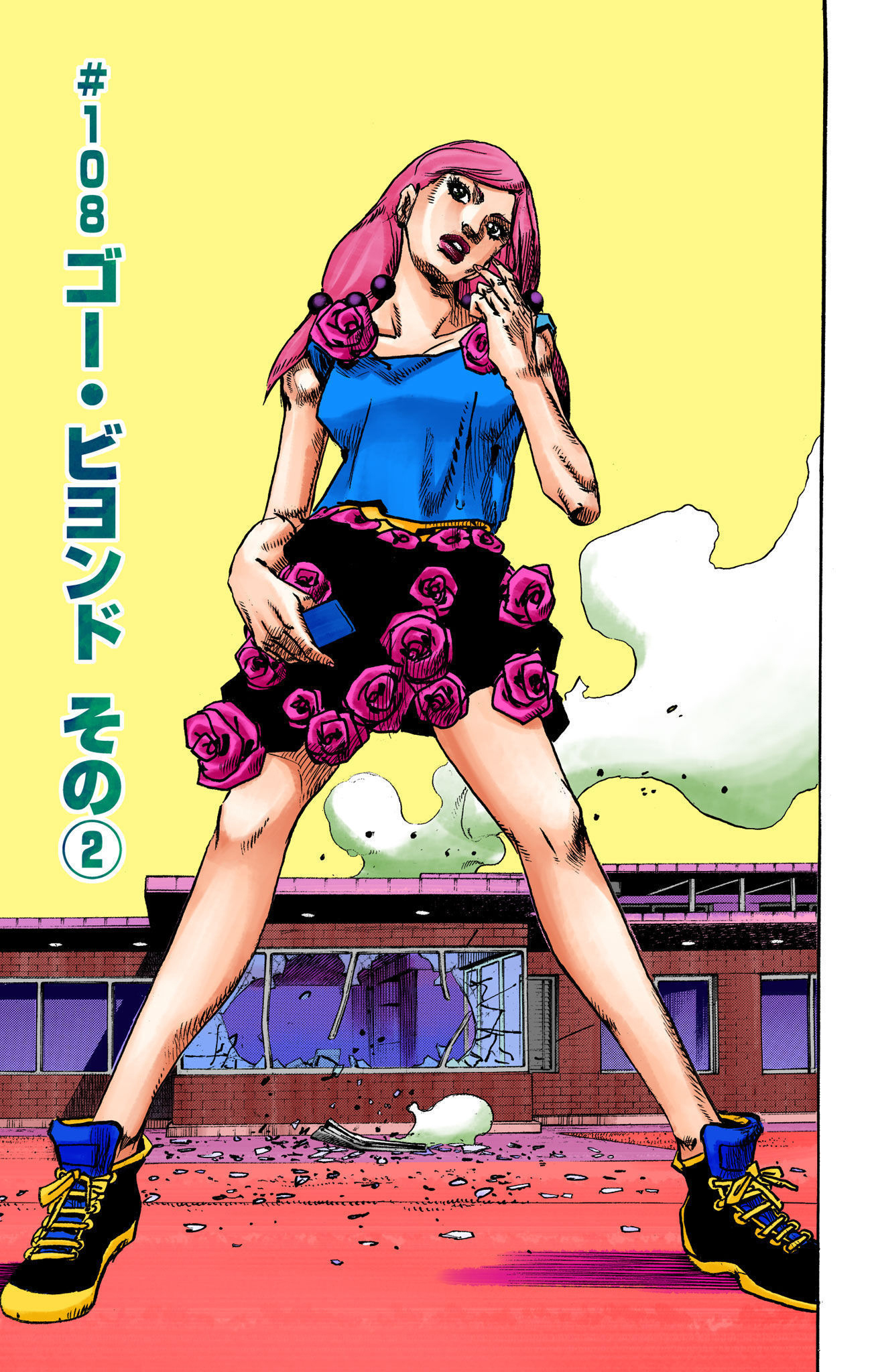 Calamity's End (最期の厄災, Saigo no Yakusai) is the one hundred eighth chapter of JoJolion and the nine hundred fifty fifth chapter of the JoJo's Bizarre Adventure manga.

Amidst the wreckage of the Higashikata House, Mitsuba painfully crawls among the debris. When she lifts her gaze, she sees the corpse of her husband Jobin and calls out to her son Tsurugi. Meanwhile, Hato and Daiya bear witness to the Equivalent Exchange that Kaato Higashikata has set up between Tsurugi and Tooru, herself wondering which way the Rock Disease will go.

Thunderstruck by what is happening to him, Tooru's panic further exacerbates when he sees Kaato destroy the New Locacaca, putting the branch between her cards to crush it and extract the sap. She then lets the sap flow into Tsurugi's mouth, helping the exchange process. In a desperate rage, Tooru unleashes Wonder of U upon Kaato as he disintegrates, but it is too late for him. Before he can lay a hand on Kaato, Wonder of U and Tooru crumble into pieces while Tsurugi is being cured of the Rock Disease. Tooru then tries to compel Kaato to stop the process. He tries to convince her that the New Locacaca is a priceless item that must be preserved, but Kaato does not care about this, as she wants to save Tsurugi and is ready to shoulder this sin too. Tooru then pleads with Yasuho to save him, invoking their friendship. Yasuho stays immobile, although she is disturbed at the sight of his demise. In a last bout of rage, Tooru orders Yasuho to do something. As Mitsuba embraces her son, Tooru hallucinates a hornet and tries to reach for it before expiring for good and turning to dust.

Everything seems to have settled. However, the family realizes that Kaato has been stabbed in her side with a pruning saw. This calamity befell her when she crushed the Locacaca Branch, which counted as an "attack." To the Higashikata Family and Yasuho's horror, Kaato Higashikata collapses in tears as she thinks of her family.

An ambulance and a fire truck have arrived at the property to help the Higashikatas. While Joshu is brought into the ambulance, Tsurugi insists that his grandfather Norisuke must have only lightly been wounded by Speed King's burn. On the corner of her eye, Yasuho glimpses what looks like the head doctor crawling towards Norisuke. She turns her head but sees nothing and approaches Norisuke to see Wonder of U's hand slipping under Norisuke. Worried, Yasuho unwraps the blanket covering Norisuke. She is initially relieved to see nothing and confirms that Tooru is now gone after turning into dust, but then the veins around Norisuke's mouth and neck begin to bubble. Norisuke bleeds profusely as the hand of Satoru Akefu starts to crawl out of Norisuke's mouth, and Yasuho realizes that a final calamity has touched Norisuke, increasing the severity of his burns. The burns worsen by the second, and Yasuho understands with horror that the calamity is an independent phenomenon that Tooru manipulated rather than generated. And now, this calamity has entered Norisuke.