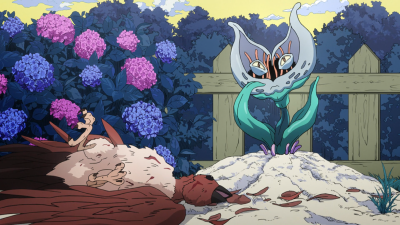 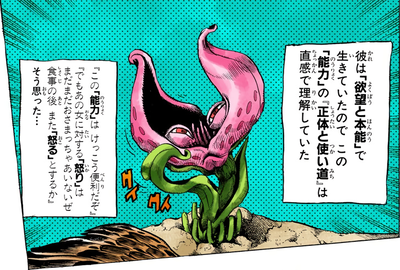 It narrates the encounter between Yoshikage Kira and the cat-plant Stand User, Stray Cat.

As Yoshikage Kira continues his life as Kosaku Kawajiri, Shinobu Kawajiri finds a cat in the basement of the house. When it becomes aggressive and reveals a hole in its chin, she panics and attacks it with a broom. Kira investigates and finds the cat dead, killed accidentally by shards of glass. He tells Shinobu not to worry about it and buries the cat in the backyard.

The next morning, the cat has been reborn as a plant.[1] When Shinobu approaches it, it remembers her role in its death and instinctively attacks her with its new power, the ability to manipulate air. Kira investigates and realizes the cat was a Stand user, likely created by his father to aid him.

When Stray Cat attacks Shinobu again, Kira defends her, unsure himself of his reasons. He is unable to defeat Stray Cat in battle, but manages to distract it, and moves the subdued plant to the attic of the house.[2][3] Shinobu is touched by his concern for her and feels that she and her husband have never been closer.

Meanwhile, Hayato is growing more suspicious of his father. One morning he secretly stays home to investigate the closet of his parents' room, where he has seen his father carrying soil and cat food. In the attic, he discovers the cat plant, and when he opens the blinds it attacks him as an instinctive reaction to the light. He manages to escape Stray Cat just in time to hide from Kira, who has come back to check on the attic. Kira, speaking to himself, lets enough slip that Hayato realizes his father has been replaced, and the impostor is extremely dangerous.[4]