The Second Order from the Boss: "Retrieve the Key!" 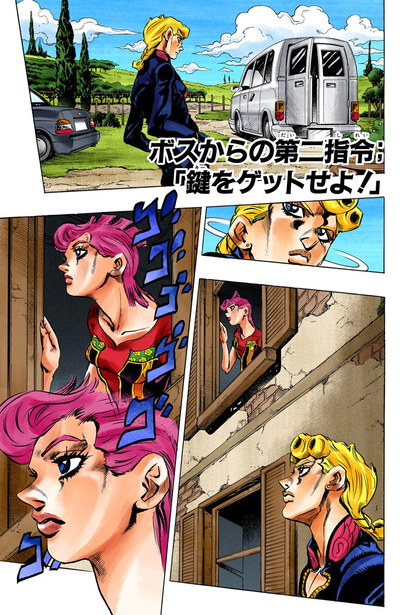 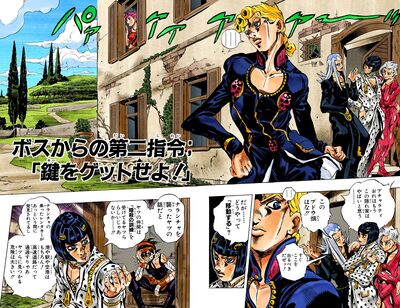 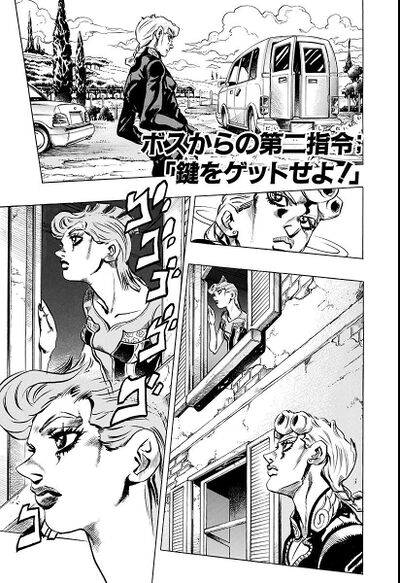 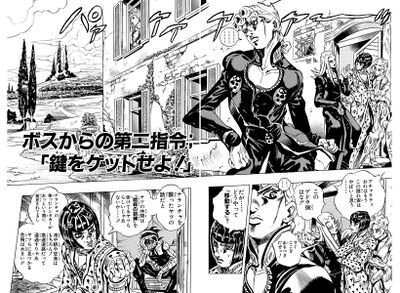 The Second Order from the Boss: "Retrieve the Key!" (ボスからの第二指令;「をゲットせよ！」, Bosu kara no Dai-Ni Shirei; "Kī o Getto seyo!"), originally The Key to the Vehicle (乗り物の, Norimono no Kī) in the WSJ release, is the thirty-ninth chapter of Vento Aureo and the four hundred seventy-eighth chapter of the JoJo's Bizarre Adventure manga.

At the grape farm in which they're hiding, Team Bucciarati debates over their next action. Abbacchio states that they should leave immediately, but Bucciarati is against this, saying that rash actions will get them killed. Fugo agrees with Abbacchio, believing this all to be Narancia's fault. Giorno defends Narancia, and agreeing with Bucciarati, says that they should wait for the boss' orders.

Abbacchio, of course, disagrees with Giorno, stating it would take to long before the boss gives them new orders. Abbacchio is then proven wrong by a sudden message sent from the boss. Bucciarati approaches the laptop used by operatives and receives his orders. The boss orders the group to go to Pompeii and retrieve a key. This key would allow them to safely use public transportation. Bucciarati orders Giorno, Abbacchio, and Fugo to go to Pompeii and retrieve the key.

The three arrive at Pompeii, and as they head to the key's location Fugo spots someone in a mirror hanging on a wall. Fugo alerts Giorno and Abbacchio of his presence behind a nearby pillar, but they are unable to see him. Fugo notices the man walking towards them in the mirror, but Abbacchio and Giorno act as if nothing is there. Fugo turns around to confirm his observation, but there is nobody there. As he stares at the pillar confused the man in the mirror steadily approaches.

(1st appearance)
Man in the Mirror