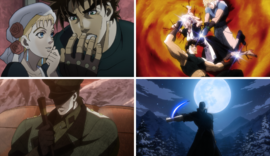 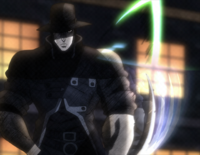 Later on that evening Kars approaches the cabin and senses the body heat of several soldiers inside, killing them with his Light Blades shortly afterwards. When he enters, he notices that there is still one soldier left in the room. Confused as to why he can't sense his body heat, Kars attacks the soldier, who blocks with his hand. The soldier's glove rips from Kars' attack and reveals that it is mechanical underneath. Joseph enters the room and identifies the soldier as Stroheim, much to his surprise.

“
This episode is a transition into the part in Switzerland, so you may think it's more peaceful, but it may be the most "JoJo" episode of all. Lisa Lisa is nude here... What other anime can show a woman in her fifties like this? Well it's true that on-screen, she doesn't look over 30 (laughs).