From JoJo's Bizarre Encyclopedia - JoJo Wiki
Jump to navigation Jump to search
This page is a translated version of the page Stone Mask and the translation is 0% complete. 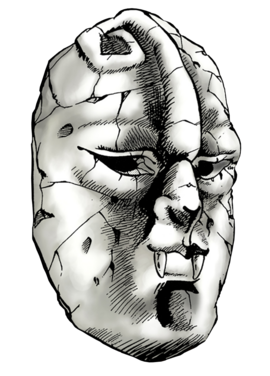 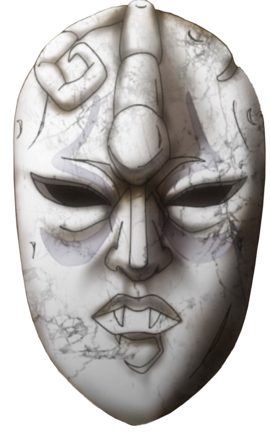 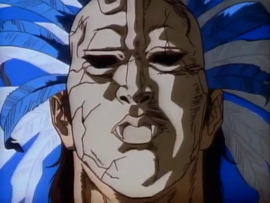 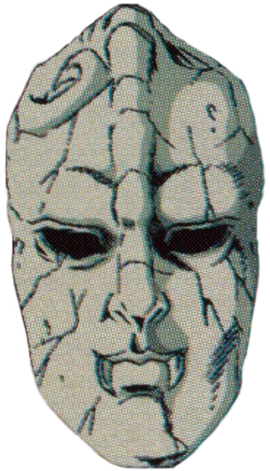 Episode 1 - Dio the Invader
“
This demonic mask has given me its unimaginable powers!
”
—Aztec Chief, Prologue

Mounted ornamentally in the Joestar family estate by George Joestar I, one Stone Mask eventually transforms Dio Brando into a Vampire, extending his life, as well as his influence over a significant proportion of the series.

In Part 2, it is revealed that the Stone Masks were designed by Kars in an attempt to grant his race the ability to withstand sunlight. 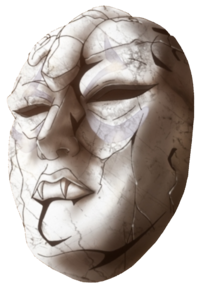 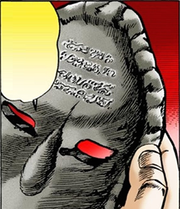 The conventional Stone Mask has the appearance of a somewhat-masculine face, its eye holes sharp and somewhat slanted. It has a small mouth in either a neutral position or a slight smile, with full lips, and small fangs resting on the bottom lip. A ridge emerges from the bottom of the forehead, running vertically to the Mask's top, joining with another ridge extending into a spiral resting on the left of its forehead.

The Stone Mask owned by George Joestar I, bore four short lines of writing on the reverse side of the forehead. Written in an obscure, semi-cursive

script, the significance of the writing is unexplained.[1] The Masks featured in the story also commonly exhibit cracks and other signs of wear, likely due to their age.

Kars' modified Stone Mask has a raised depression in the middle of its forehead, in the mold of the Red Stone of Aja.

Between the 12th and 16th centuries, an ancient Aztec ritual took place in Mexico, where a man wearing a Stone Mask sacrificed a young woman. The man's tribe tried to conquer the world with the help of the Stone Mask and its powers, before suddenly disappearing from history.

During the mid-to-late 19th century, one Stone Mask was excavated from an Aztec ruin by a team led by Will Anthonio Zeppeli's father. After donning the mask, Zeppeli's father slaughtered his crew and died from exposure to the Sun, leaving the mask to drift off into the unknown.

The same mask eventually lands itself in the possession of the English aristocrat, Mary Joestar, who had purchased it from a London art dealer during her travels.[2][3] After her death, the mask is retrieved by her husband, George Joestar I, who mounted it on a wall in his family home.

The Mask later becomes the subject of research by Jonathan Joestar during his studies as an archaeologist, who is unable to understand its purpose and is only able to come up with speculative theories.

These theories attracted the morbid curiosity of Dio Brando, who believed it to have been an execution device that he could attempt to use on Jonathan. After testing it on another human, he realizes that it transforms them into vampires.

When Dio's crimes were exposed, he stabbed George and used his blood to activate the Mask on himself. This transformed Dio into a vampire, enabling him to further torment both Jonathan and his descendants.

In Part 2, a collection of Stone Masks surround the sites of the Pillar Men's slumber; both with Santana in Mexico, and with Wamuu, Esidisi and Kars in Rome.

It is revealed that Kars is the original creator of the Stone Masks. He intended to use them to give himself and/or his race the ability to withstand sunlight, only to discover that the Mask's tendrils were unable to push their brains further, due to their immortal bodies.[4] Theorizing that he required greater power to strengthen the Mask, he designed a modified version meant to be combined with the Red Stone of Aja. Kars kept this version of the Mask with him during his long search for the Stone, eventually succeeding in combining the artifacts and becoming the Ultimate Being. This Mask was destroyed after Kars' transformation.

The Sezione Droghe decides to retrieve a Stone Mask found in an old Nazi bunker to power up Massimo Volpe. Giorno orders Cannolo Murolo to destroy it as part of Passione's agreement with the Speedwagon Foundation, and Murolo succeeds in doing so.

The Stone Mask is triggered when it is touched by blood. It then extends tendrils of stone from its edges, piercing the wearer's skull and brain. The tendrils are meant to find and trigger certain precise points of the brain; the process is described as being similar to acupuncture

The Mask's wearer is then released from the constraints of natural limitation, gaining immense strength and other abilities. This vampirism process has been shown to work at least on humans and horses. The process produces a brief flash of light.[5]

According to Robert E. O. Speedwagon, humans who wear the mask can jump 5 to 8 meters, can punch with a 2000–4000 kg/cm2 force, and their leg strength triples.[6] However, the process simultaneously renders the body "dead" (in a sense) or unable to contain life, giving them a weakness to direct sunlight or the Ripple. This collection of effects designates the wearer as a Vampire.

Pillar Men who wear the mask are given the ability to manipulate their bodies and near-invincibility, but require even more energy from other living creatures to sustain themselves. Using this augmented form, Kars was able to wipe out his entire clan.[7]

To unlock further power, Kars created a modified Stone Mask which, when fitted with the Red Stone of Aja, had the ability to pierce a Pillar Man's skull completely. This Mask is triggered by exposure to intense light, such as the UV beams released by the Nazis' anti-vampire weaponry.

In this case, the Mask unleashes a retrograde effect, in which Pillar Men are completely immune to the Sun, gain the ability to use the Ripple; and transform their bodies on a cellular level into any creature (preexisting and new, conceivably). The Mask itself is destroyed in the process, likely due to the immense amounts of power emitted by the Red Stone.

It is unknown what effects would occur if a human, or a vampire, were to wear the Aja-enhanced Stone Mask.