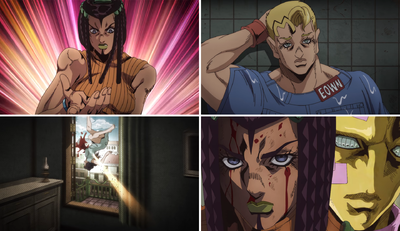 Ermes's Sticker (エルメェスのシール, Erumesu no Shīru)[2] is the sixth episode of Stone Ocean and the one-hundred-fifty-eighth episode of the JoJo's Bizarre Adventure anime. The episode covers Chapter 21 to Chapter 25 of the original manga.

Jolyne returns to prison to retrieve Jotaro's discs. Ermes Costello discovers her new ability and a guard with discs in his head before she's attacked.

Emporio recaps the story of Green Dolphin Street Prison, in which he's always lived in hiding. At an obscure point in time, a strange murky power has begun manifesting in the prison: the Stand Whitesnake which can put people to sleep and then digest them with an acid, as well as stealing their "minds". Its real identity is unknown and why it keeps stealing minds and Stand abilities is unknown. It has recently stolen Jotaro's mind and his ability Star Platinum. However, his daughter Jolyne has decided to stay in prison and she believes that she can save her father by retrieving the DISCs that Whitesnake stole from Jotaro. Expressing his hope in Jolyne's confidence, Emporio awaits the moment Jolyne is freed from her solitary confinement to begin their plan. He also explains that he must contact another prisoner, Ermes Costello.

At the same time, we see a man mopping the prison floor. Seeing Ermes laying on a bed, the man sneakily approaches his hand and slips it inside of her dress, taking some money from her. Ermes, feeling the hand, suddenly awakens and calls the thief out, but he's already disappeared. Angry at the janitor, Ermes notices that she's on IV and that she's in the infirmary. Taking a sticker out of her palm and tossing it aside, Ermes remembers that back at the holding jail, she picked up a pendant stuck on the drain cover of a meeting room, picked it up but then cut her hand on it, then selling it to Gwess. She reads her examination card and realises that she's slept through six whole examinations from the doctor. However, Ermes now feels fine.

She then notices the sticker stuck to her palm again and picks it up, but a number of stickers still appear on her palm, which startles her. Confused and angry, Ermes then notices that a third shoe has appeared besides her normal pair of shoes, and then sees a sixth finger on her hand when she tries to grab the extra shoe. Panicking, she tries to shake the sticker off her hand and then tears it off, causing the sixth finger to fuse back to her normal finger, hurting her a bit. Fearing that her fever has made her delirous, Ermes notices that the chamber pot has been duplicated as well and when the sticker peels off, the duplicated pot fuses with the normal one, though the backlash breaks the pots. Ermes shrieks in disgust, which wakes the other prisoners in the infirmary, who all complain at her. After telling them to go back to sleep, Ermes realizes that her power is real and begins to understands the mechanics of her ability. When the janitor comes back to take his mop, Ermes sets up a trap for him. She's duplicated the mop and takes the sticker at the right moment so that the extra mop flies back to the original, whipping the janitor and trapping his head between the two shafts of the mops. The man is knocked out and Ermes feels satisfied at her mastery of her ability. She grabs the man by the pants and drags him closer to her, demanding where he's hidden her money. However, Ermes notices a pair of DISCs sticking out of the man's head and takes one of them without thinking. Confused, she hides from the janitor and wonders what is the disc she's taken out of the man's head.

Ermes is finally discharged from the infirmary. She asks the doctor what is the janitor's name, but the guards order her to move on. She then tries to ask other inmates about the janitor, but nobody knows who she's talking about. Ermes goes to the toilets to examine the DISC. Watching closer, she sees glimpses of a hiding place, and notably sees from the point of view of the janitor that the Stand Whitesnake has approached the man named McQueen. Baffled, Ermes quickly extracts the DISC out of her cheek, the DISC falling into the toilets. Suddenly, someone calls Ermes out from behind. She turns and sees the janitor, Thunder McQueen, who comments that he's never been followed by a woman. Ermes angrily asks what is up about him, but to her dismay, McQueen begins to cry, lamenting the fact that he can't remember what has happened and calling himself out for it. Ermes asks him if he's alright, prompting another mood switch. McQueen feels overjoyed at the idea that a woman could care for his well-being and feels happy but he rapidly switches back to dejection and decides to hang himself with his belt. Taken aback, Ermes then feels herself being lifted up as protusions equipped with propellers sprout from her neck and lift her in the air.

The DISC's reflection displays in full what Whitesnake has told McQueen. Whitesnake admires the lack of animosity of McQueen since, it says, animosity will always encounter something stronger that will destroy it. However, McQueen possesses a particular kind of evil that makes it so he doesn't make trouble but thinks he's a victim. Thus, Whitesnake has bestowed him an ability so that he eliminates an enemy for him, which happens to be Ermes. Ermes feels herself being choked by an unknown force, but quickly understands that McQueen was somehow responsible by hanging himself. Suffocating, Ermes quickly tosses a sticker onto the belt, then takes the sticker out of the duplicate to make the two belt fuse. Damaged, the belt rips from McQueen's weight. Thus, he and Ermes are both saved.

Angry, Ermes orders McQueen to stay away from her although the latter is simply confused that Ermes would take an interest in her. Still angry, Ermes asks him why he would hang himself all of a sudden. McQueen explains that it was an urge that has taken him over and promises to treasure his life. McQueen seems ignorant about it and says he's indebted to her. Embarrassed, Ermes takes her gaze away for a short moment, but when she opens her eyes again, she sees McQueen drowning himself in a sink. Immediately, a liquid oozes from Ermes's nose and mouth, engulfing her face in a liquid ring that threatens to drown her as well. Ermes sees scars on McQueen's wrist and realizes that he's an unstable man with a severe suicidal streak. She realizes she must escape from him somehow. McQueen's ability forces Ermes to be upside down and she floats midair, unable to grab onto anything. Thankfully, she has the presence of mind of putting a sticker on her nose, developing an extra nose which allows her to breathe. This gives her the time to grab the mop and knock McQueen out of the faucet. Ermes understands that McQueen's ability must be linked to the DISCs she's seen. She decides to take the memory DISC in the toilet as McQueen begs Ermes to let him die because, in his own word, he's "trash". Ermes yells at McQueen and threatens to kill him if he approaches her again, but it only drives McQueen to beg her to personally off him. Flummoxed, Ermes decides to simply leave. Suddenly, McQueen's gaze becomes sharper and he becomes aware of the fact that the DISC in Ermes's hand belongs to him.

Ermes pushes her way through the crowd in the medical ward, wanting to go back to her cell. At the same time, she asks herself if there could be other people with similar abilities inside of the prison. Distracted, Ermes then meets Emporio while descending a staircase and is naturally perplexed to see a boy playing with a baseball, muttering about Stand abilities drawing towards one another and about finding her. Emporio then begins to explains the situation to Ermes, notably that the true enemy is Whitesnake, who is responsible for the appearance of the DISCs, which can contain either a Stand ability or the memories of the person from whom it's been extracted. Ermes presents the DISC she's taken from McQueen, and Emporio becomes interested in McQueen's Stand DISC, hoping that they could learn something from it. Their discussion is interrupted when Ermes's wrist begin bleeding and she then feels a shock. Ermes realises she's still under McQueen's ability's spell and that McQueen is trying to electrocute himself.

Emporio offers his help. Seeing that McQueen is trying to electrocute himself although he's stopped for now, Emporio theorizes that McQueen would go seek saline water to rise his body's conductivity and thus be able to actually kill himself via electrocution. Ermes realizes that saline water is stored in the medical ward for medicinal purposes and thus rushes to the storage room in said ward, only to find McQueen having tied himself with a nude electrical cord and about to pour saline water over himself. When he douses himself, Ermes tries to explain the situation to him and asks him to think about positive things. McQueen then begins to explains his story. Four years ago, McQueen was cleaning his shotgun in his apartment. However, it was loaded and the shotgun was triggered, shooting a slug into the window. By sheer back luck, a woman who was jumping down her window was hit and killed by the slug instead, and so he was condemned for murder. Ermes herself is taken aback by the sheer unluckiness of McQueen.

McQueen then yells and prepares to switch the electricity on, but Ermes stops him. Desperate, Ermes proposes to give him her panties, just so he has a positive experience with women in his life. She tries to play up her enthusiasm and tries to inspire him to see things in a better light, but McQueen is reminded of the day of his arrest when she tries to talk about "the fun Saturday". McQueen sees through Ermes's game and says that she's only being nice to save herself. Depressed by how little people care about him, McQueen still wants to go through with his suicide. Having had enough, Ermes then calls him out on his selfishness. Crying from joy, McQueen comes to truly admire Ermes and decides to kill himself and take her with him so he won't die alone. Ermes rushes towards McQueen but he flips the switch and both of them suffer from a violent electric shock. Thankfully, Ermes has managed to put a sticker on his face, making a duplicate of his head attached to him. As Ermes has planned, the sticker burns out from the electric shock and the two heads of McQueen merge together. The backlash snaps the electric cord and also knocks McQueen out. The Stand DISC comes out of McQueen and Ermes can take it, neutralizing McQueen for good.

Ermes remembers the precious $5000 McQueen has accumulated and hidden and plans on taking the money, but also decides to take on Whitesnake as she wants to get rid of the person responsible for this mess. Thus, Ermes decides to go seek Jolyne and cooperate with her.