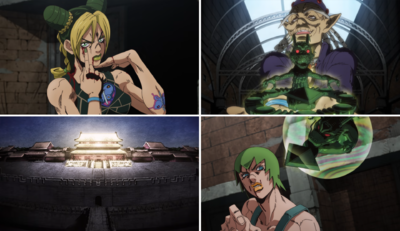 Enter the Dragon's Dream (燃えよ, Moe yo Doragonzu Dorīmu) is the seventeenth episode of Stone Ocean and the one-hundred-sixty-ninth episode of the JoJo's Bizarre Adventure anime. The episode covers the rest of Chapter 66 to Chapter 70 and 3 pages of Chapter 71 of the original manga.

Another prisoner stands in Jolyne's way: Kenzou, an elderly martial artist. F.F. appears to fight Kenzou, but the old man proves more dangerous than expected because of his mastery of Feng-Shui and his Stand Dragon's Dream.

Jolyne has won but still has to look for DIO's Bone and the prisoner who played with it. However, she sees a number of bloated corpses around her. One of the prisoners even dies right in front of her, bloating for an unknown reason. She realizes that she has to deal with other Stand Users and spots a pair suspicious men standing among the dead prisoners. She is unsure about who did what but she knows that she is dealing with at least three Stand Users and must find the prisoner who had DIO's Bone.

One of the prisoners, a short old man, advances toward Jolyne. Cracking his knuckles and bending his fingers backwards so much that they touch the back of his hand, the man reveals himself as a Stand User rather interested in Jolyne's ability as well as her fighting ability. Finishing bending to warm up, the old man named Kenzou stands ready to battle. For his part, the other man prefers to stand aside. Jolyne accepts the challenge, taunting him by giving him the finger.

Kenzou reveals that he drowned the prisoner around him, but then says that Jolyne is not the priority yet. He strikes a man's elbow, making it punch another corpse and thus forces F.F. to leap out of her hiding spot. F.F. jumps high and shoots at Kenzou with some plankton bullets but a corpse spontaneously moves, blocking the projectiles. F.F. dismisses is as dumb luck and continues her battle. Narciso Anasui also makes his appearance on the far side of the hall.

F.F. advances towards Kenzou who summons his own Stand, a strange metallic ring with an arrow decorated with a dragon head, which Kenzou uses as a sort of compass to single out a particular point in space. The old man proceeds to advance, expecting F.F. to open her lips as soon as a drop of sweat reaches her mouth. F.F. shoots several bullets, but they all miss Kenzou who rushes towards her and puts his arm inside of her mouth. Suddenly, F.F.'s mouth fills with water. Kenzou explains that humans can easily drown if a few drops of water block their respiratory system. He wounds the cervical inside of F.F.'s mouth and stimulates the adrenal glands, causing a great release of mucus in the trachea and thus suffocating her. F.F. falls and begins to bloat too, but she is able to pierce her throat while Kenzou has his back turned on her. The old man notices the danger and barely evades F.F.'s subsequent shots, some bullets glancing his leg. He retaliates with a kick but F.F. squeezes between the bars of a handrail to evade the attack, causing the old man to question whether she's human.

Meanwhile, Anasui has joined up with Jolyne and advises her to observe the fight carefully. He proceeds to try and analyze Kenzou's fighting style, although he also confesses his love for Jolyne, which surprises her. Anasui proceeds to present Kenzou, who is a 78-year-old man who's been in prison for 40 years. Kenzou used to be at the head of a cult but he soon caught the attention of the authorities. Kenzou thus gathered 34 followers, drugged them, and then put fire to his building, killing everybody but himself. Miraculously, Kenzou survived, some debris shielding him from the fire.

Meanwhile, Kenzou observes F.F.. Influenced by Survivor, he distinguishes the Stand and plankton within her body, but remains confident. He summons his Stand Dragon's Dream and identifies a spot to go to again. Kenzou slowly slides his feet towards the spot while a great dragon-headed arrow appears behind F.F. She tries to shoot it but the bullets don't affect Dragon's Dream. The Stand actually talks to F.F. and warns her about Kenzou's incoming attack although, he says, he can't "interfere" in the battle. Kenzou attacks with a swiping kick which F.F. ducks under. She counter-attacks with a barrage of punches but the old man blocks them easily. Grinning, Kenzou leaps and plunges his arm into the bubble surrounding Dragon's Dream, which seemingly tears his arm off. However, Kenzou's disembodied arm then flies to strike F.F. from behind. Warned by Jolyne, F.F. shields herself and is merely sent a few metres away. F.F. is unimpressed by the strike and Kenzou starts to bicker with his Stand about it warning the enemy.

Incidentally, the drops of blood F.F. has spilt on the wall attract a trio of mice. They proceed to climb the wall and mess with a control board, closing the doors of the cell. One of those doors crushes a man's head and his eyeglasses, and the thing flies right into F.F.'s mouth. Surprised, F.F. opens her mouth again and Kenzou attacks. Thankfully F.F. manages to evade the strikes. Jolyne is surprised at the coincidence that led to that opening, but Anasui has guessed that Kenzou is using "Feng Shui" to attack. Feng Shui is an ancient Chinese art which determines lucky and unlucky spots according to flows of energy. Usually applied to houses and buildings, Kenzou uses that art to determine the path he has to follow to strike and kill his enemies, and Dragon's Dream helps him determine the lucky spots where he can evade attacks as well.

Kenzou resumes his aggression, carefully walking towards a lucky spot where F.F.'s bullets will be rendered ineffective. Dragon's Dream reappears behind F.F. and points to another unlucky spot for her. Jolyne warns her about the Stand's power, and F.F. deems that she must stop the old man from touching his Stand at all cost. Dragon's Dream points to F.F., explaining that the spot above her ear is very unlucky, and Kenzou is fuming about his enemies knowing about his powers. Kenzou disappears, only to reappear to strike F.F. and she tries to counter him with a sole to the face. Kenzou grabs onto her leg and she answers with a knifehand strike towards his head but Kenzou deflects her hand and counters into a left cross right in the sternum. This allows him to plunge his hand into F.F.'s mouth but F.F. still counters the blow by biting hard into his fingers. Reeling from the pain, Kenzou strikes her liver to force her to release him. Kenzou realizes that he has to rely on Dragon's Dream]to completely finish her off. Still, he lands a vertical kick on F.F., throwing her into Dragon's Dream. It bites into F.F.'s arm, making it strike another corpse for an unknown reason. Kenzou thus deems his attack completed.

F.F. is confused and asks Dragon's Dream what is going on, but even he doesn't know what will happen. Her striking a corpse happens to have disturbed a couple of flies which go near a ventilator. A bird appears to snatch a fly but it is killed by the ventilator, breaking the fan; finally, a piece of metal falls, rebounding on the ground and slicing her head open. Helpless, Jolyne screams F.F.'s name in terror.