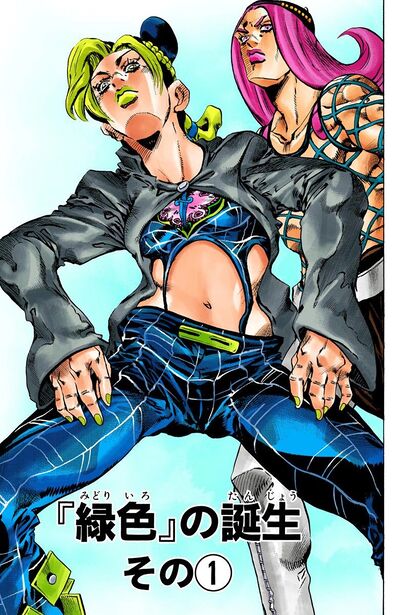 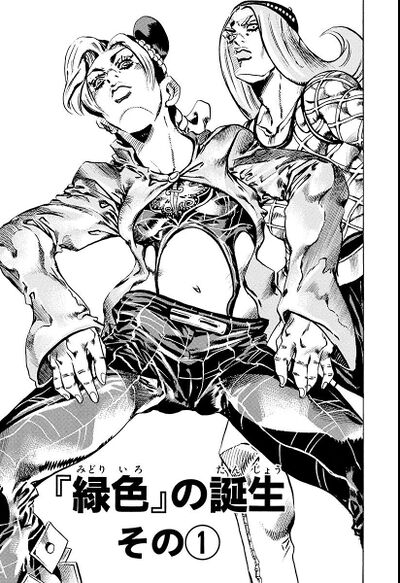 Birth of the "Green", Part 1 (『緑色』の誕生 その①, "Midoriiro" no Tanjō Sono 1), originally The Boy and the Bone (小男と骨, Kootoko To Hone) in the WSJ release, is the seventy-sixth chapter of Stone Ocean and the six hundred seventieth chapter of the JoJo's Bizarre Adventure manga.

Jolyne, Anasui, and F.F. walk up a staircase to exit the execution chamber. While walking, Anasui asks F.F. to trip Jolyne so he can catch her. While initially rejecting the idea, F.F. decides to help him and trips her. Before Anasui can catch her, Jolyne uses a string to grab onto a prisoner above them. Jolyne notices that the prisoner is holding onto DIO's Bone, and the three try to retrieve it.

The man's arm tears apart and he starts slithering away; they notice that his spine is bulging out of his back, and that he seems to be growing taller. As they approach the man, they find that he is transforming into a plant; his eyes become flowers, with his mouth turning into a stem or trunk. His head bursts, spreading some sort of pollen. The three look around, observing that all the bloated inmates are turning into plants.

Elsewhere, in the ultra security ward, D an G stands over the bone. He contemplates picking it up, but is afraid that touching it will cause him to transform, and that even touching one of the infected will cause the transmutation. As the three try to get a grasp of the situation, flowers begin sprouting from Jolyne's head.