The Secret of Guard Westwood, Part 2 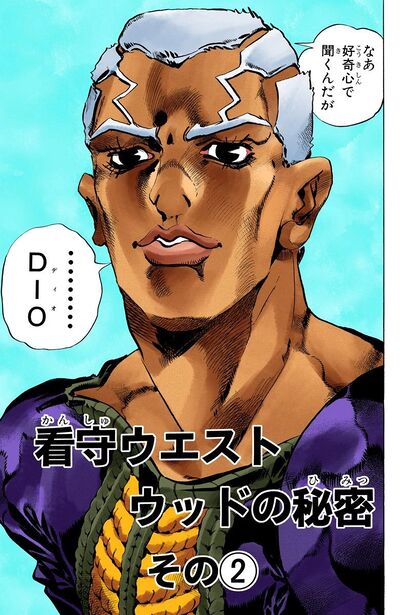 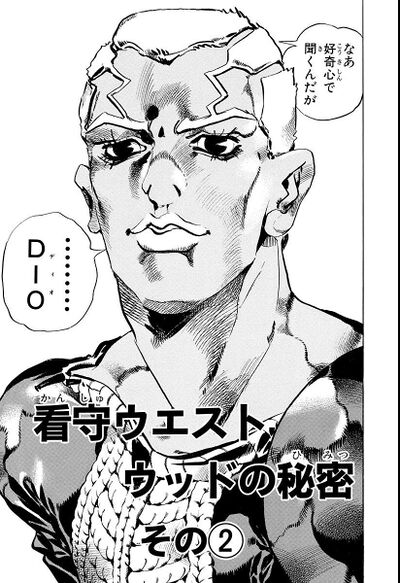 The Secret of Guard Westwood, Part 2 (看守ウエストウッドの秘密 その②, Kanshu Uesutouddo no Himitsu Sono 2), originally The Weakest Stand in History (史上最弱のスタンド, Shijō Sai Jaku no Sutando) in the WSJ release, is the sixty-first chapter of Stone Ocean and the six hundred fifty-fifth chapter of the JoJo's Bizarre Adventure manga.

In a meeting with DIO back when he was alive, Pucci asks what he believes to be the most worthless Stand. Despite believing no Stand is truly worthless, DIO explains that the worst would probably be Survivor. He tells a story of six people going hiking on a mountain: Before climbing the mountain, they stopped at a lodge and got in a fight with the owner. After leaving the lodge, they climbed the mountain, got in a fight, and brutally murdered each other. The only survivor of the fight bled out before he could reach the bottom. Survivor's ability is that it makes all those around it fight to the death.

DIO explains why it's worthless. Pucci asks if he can store the Stand on a disc for future use. In the punishment ward under the effect of Survivor, Westwood lets out all the inmates so that he can fight them. Jolyne walks out of her cell, determined to find DIO's Bone, even if she has to kill someone. She is shocked by her conqueror's resolve. Westwood charges at her.

She tries to attack him with Stone Free, but he swiftly avoids her. By running on the wall, he manages to get behind her. She quickly creates strings and grabs his leg with them. Thanks to Survivor, Westwood can see Jolyne's strong and weak points. Realizing him as a threat, Jolyne decides that she must eliminate him with absolute prejudice.