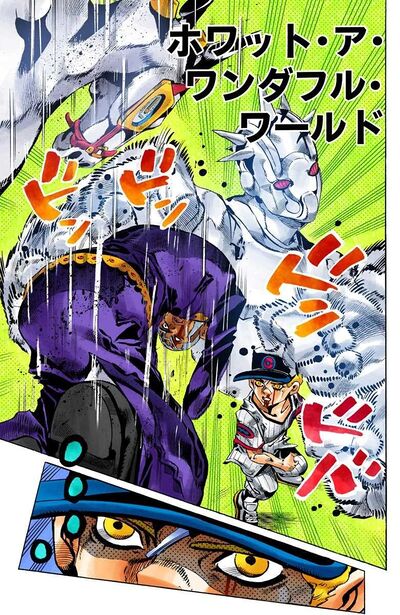 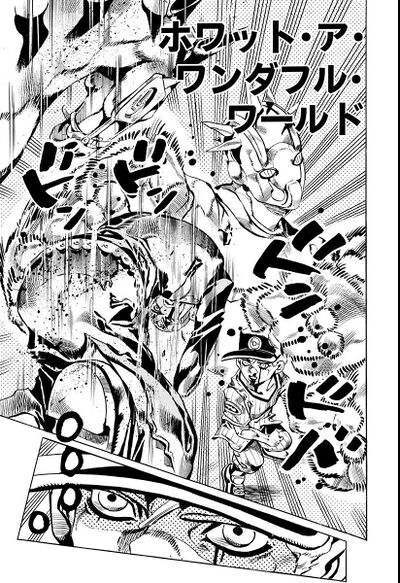 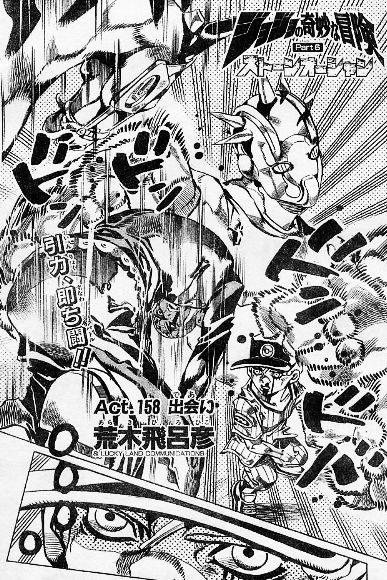 The priest begs for his life, stating that Pucci's actions and DIO's legacy will be for naught if he dies since humanity will no longer be able to attain heaven and witness their true fates. A defiant Emporio puts down his entire argument in one short sentence, stating that "walking the path of justice is true Fate". Enraged, Pucci futilely tries to reach Emporio with his arm, but Weather Report rips out Pucci's face and pummels the unfortunate priest into oblivion. Shortly afterward, the universe is shown reaching a vanishing point again.

Emporio finds himself on the side of a road, near a gas station. Walking toward a bus, he hears someone complaining about being unable to pay a ticket because they have no change. That person, going down the bus to make some change, asks Emporio if he has any. Emporio is stunned to meet an alternate version of Ermes, who sees the bus leaving anyway and yells at it. Suddenly a stranger in a car proposes Ermes to go in his car. She refuses at first, being cautious around strangers, but the stranger remarks that a storm is coming. Emporio looks at the stranger and his companion with amazement, as they look like Anasui and Jolyne, although they are named Anakiss and Irene. Irene gently proposes Emporio to go with them, asking where he comes from and his name. Emporio, upon witnessing the Joestar Birthmark on Irene, begins to cry, only able to say his name. As the reincarnated Joestar Group gets in the car, they shortly meet a hitchhiker with a strong resemblance to Weather. The car drives into the horizon as heavy rain covers the scenery.