Made in Heaven, Part 5 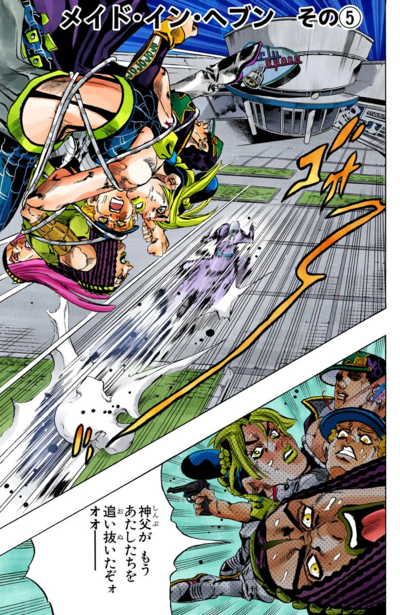 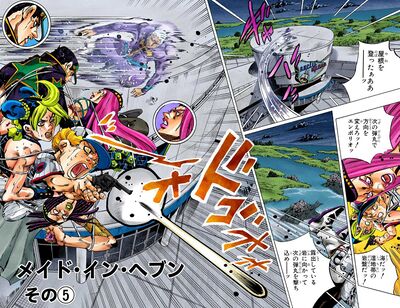 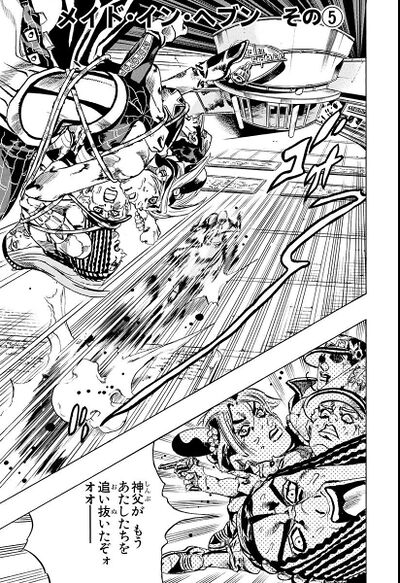 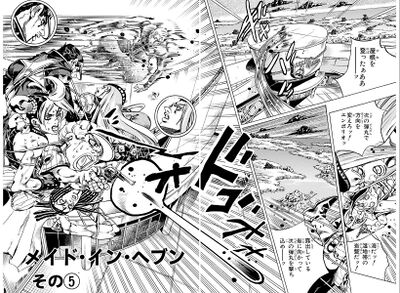 Made in Heaven, Part 5 (メイド・イン・ヘブン その⑤, Meido In Hebun Sono 5), originally Alright (いいわ, Ī wa) in the WSJ release, is the one hundred fifty-third chapter of Stone Ocean and the seven hundred forty-seventh chapter of the JoJo's Bizarre Adventure manga.

Pucci dashes ahead of the Joestar Group who attempts to reach another rooftop, and then jumps to the top of the building. Anasui then tells Emporio to shoot toward the ocean. As Pucci moves in for another attack, Jotaro and Anasui form a plan to attack Pucci in Star Platinum's stopped time, which puts Anasui at great risk. Everyone says it is too reckless, but Jolyne suddenly accepts that Anasui proposes to her, saying that his plan is a hopeful one.

The group has almost arrived to a rock, but the priest is already waiting for them, forcing the group to move in the middle of the water. They expect to be able to see the enemy coming, but time has been accelerating since the beginning. As a result, the waves now hide the location of the priest. Anasui is suddenly impaled, prompting Jotaro to stop time. In the stopped time, Jotaro realizes that the Stand that killed Anasui was actually Stone Free, which has been manipulated by Made in Heaven.