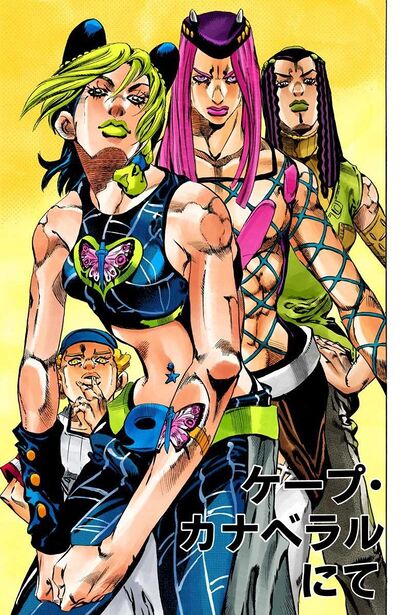 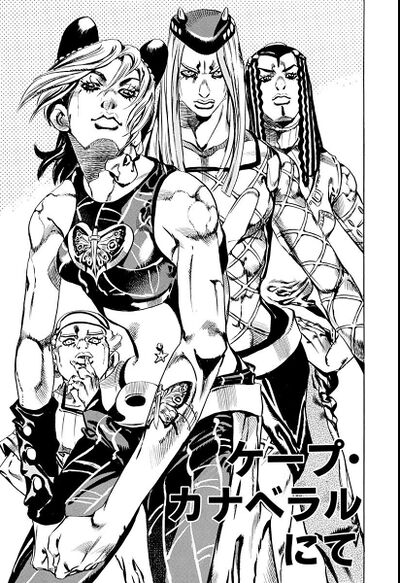 Jolyne, Emporio, Ermes and Anasui are driving toward Cape Canaveral to stop Pucci's plan. During this trip, Jolyne ponders on everything that has happened, thinking about Weather's death, her father Jotaro. Out of her depth, Jolyne isn't sure what she has to do anymore, and falls asleep out of exhaustion, coincidentally on Anasui's chest.

Anasui decides to use the occasion to slip a ring he bought in prison into her finger, promising himself to confess his feelings once she wakes up. Suddenly, Ermes shouts that an alligator is on the side of the road, waking Jolyne up as Anasui slips the ring. Ermes and Jolyne, still furious about the alligators that attacked them, insult them and Jolyne tosses something toward them. Anasui realizes that Jolyne has tossed the ring away, and crying, asks Jolyne to open her hand, to the latter's confusion.

Meanwhile, Pucci is waiting in the Kennedy Space Center. A guard cuts the line right before him, but a sympathetic tourist pretends Pucci is with him, allowing the priest to enter early. The tourist tries to hold a conversation, but Pucci shoos him away. While a broadcasted presentation explains that the hardest part in a launch is escaping the Earth's gravitational pull, Pucci and objects around him begin to be pulled sideways, eventually causing the tourist to impale himself on a barrier without being noticed.