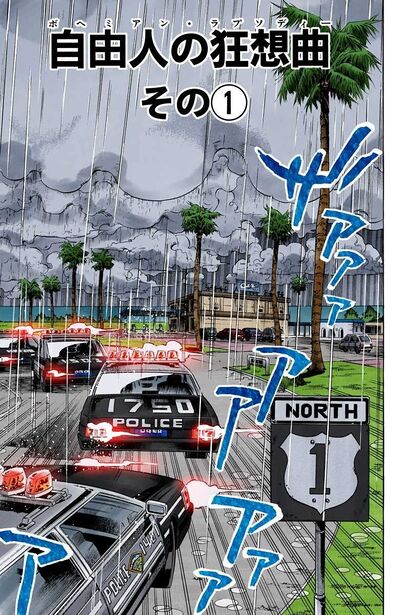 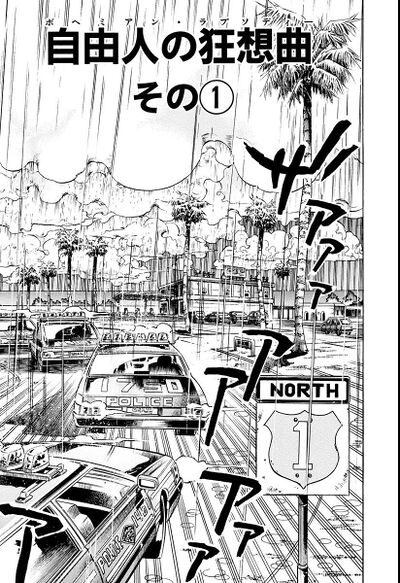 Weather helps an old man get up after he trips and drops his groceries. According to the old man, his injured knee starts to ache on rainy days. While in a public washroom, Anasui tells Weather not to do anything that will make them stand out because they're fugitives. Meanwhile, Weather is busy looking everywhere around the sink because it has no spigot, to which Anasui replies that automatic sinks have existed outside of their prison for several years.

Anasui asks Weather Report to remember who he is. He's suspicious after seeing the Joestar Birthmark on his neck, which he noticed was also present on The Green Baby, Jolyne, and Jotaro. Weather is determined to defeat Pucci, who he believes is his enemy. However, they have to escape the area which is difficult with cop cars surrounding them. Anasui condemns Weather for not stealing a car earlier, but Weather says it's too risky. Instead, he uses his Stand to clear the clouds above the old man he rescued earlier, causing a ray of light to shine on him. The pain in the old man's knee goes away, and he decides to give the two a ride in the back of his truck.

Anasui wonders how Jolyne is doing. Weather senses her traveling north, so they decide to go that way as well. As he looks at a guidebook, Anasui notices that Disney World is up north. The guidebook doesn't show any Disney characters on it, and every image appears to show a blank silhouette. They even pass by a blank sign which frustrates Anasui because there's no Mickey Mouse anywhere. Just then, Anasui sees a black tail move behind one of the crates in the truck. Thinking it's an enemy, he uses Diver Down to grab whatever is hiding inside it, which he discovers is a wooden doll that has a long nose.