Three Men in the Hospital 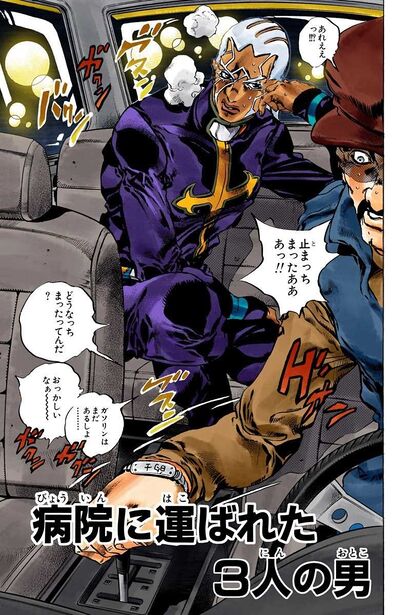 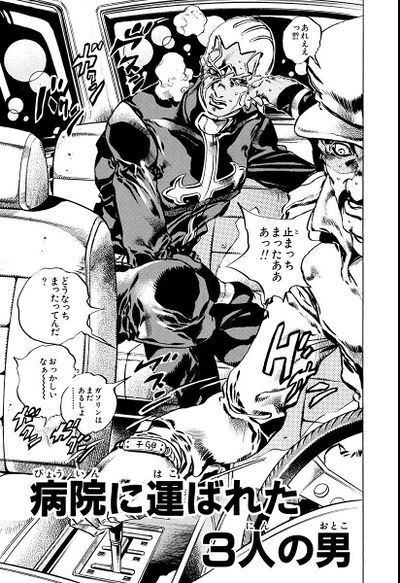 Three Men in the Hospital (病院に運ばれた3人の男, Byōin ni Hakobareta 3-nin no Otoko), originally The Flow of Three (３つ流れた, Mittsu Nagareta) in the WSJ release, is the one hundred third chapter of Stone Ocean and the six hundred ninety-seventh chapter of the JoJo's Bizarre Adventure manga.

Pucci is sitting inside a taxi, strangely unable to start up even though it was in good condition. Pucci sees around him many occurrence of the number "3," and decides to take a walk near a hospital. He fatefully sees three ambulances coming with three patients in critical condition, and from them, a coin, a bullet and a ring all roll toward him.

One of the patients wakes up and holds Pucci hostage with a pair of scissors. Pucci then understands the meaning of the occurrence of "3," and stabs himself with the scissors, shocking everyone. He fatefully sees that the wound is not mortal, and goads the hostage holder into becoming part of a grander scheme. Disturbed, the hostage holder tries to flee and is shot by the policemen. However, the stick figure from a traffic sign detaches itself and begins to drag the man, who mysteriously sports the Joestar Birthmark, to safety.

Meanwhile in prison, Weather senses that Jolyne has escaped and intends to do the same. Anasui is however more concerned by the Joestar Birthmark on Weather Report's neck, asking himself who he truly is.