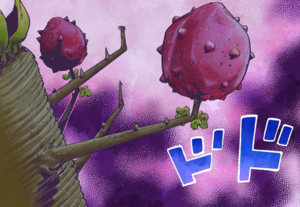 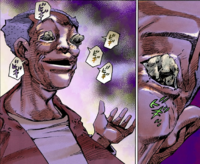 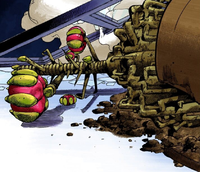 It's eventually revealed that the branch stolen and grafted by Josefumi Kujo resulted in a New Locacaca (新ロカカカ, Shin-Rokakaka). Although the fruit cultivated with this branch had not yet ripened, it demonstrated a unique ability compared to typical Locacaca fruits. Upon feeding Kira the fruit that they had grown, Josefumi began transforming into stone, beginning with parts of his body that were in direct contact with his late friend. No negative side effects were shown on Kira's end, implying that this species allows an individual to undergo the fruit's effects by using another person's body as collateral for the equivalent exchange, rather than their own. The specifics behind it are currently unknown, but according to Urban Guerrilla, the New Locacaca could be used by Rock Humans to gain a significant advantage over the rest of society. Obtaining the New Locacaca is the main objective of the Locacaca Research Organization, including Poor Tom and his associates.[6]

Locacaca 6251 (6251) is the name of an experimental Locacaca-based drug produced by the higher-ups of the Locacaca Organization operating within T.G. University Hospital. Locacaca 6251 is an orally-administered liquid drug that yields a modified version of the Locacaca's natural equivalent exchange property. Regeneration begins briefly after the ingestion of a 150 g (0.33 lb) dosage of the drug.[7]