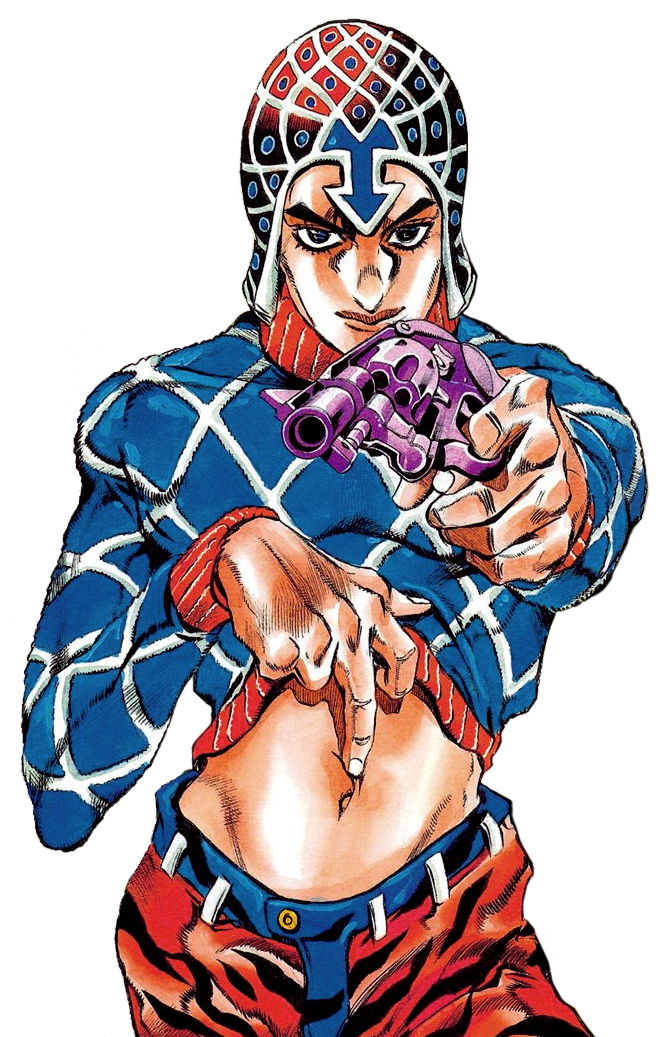 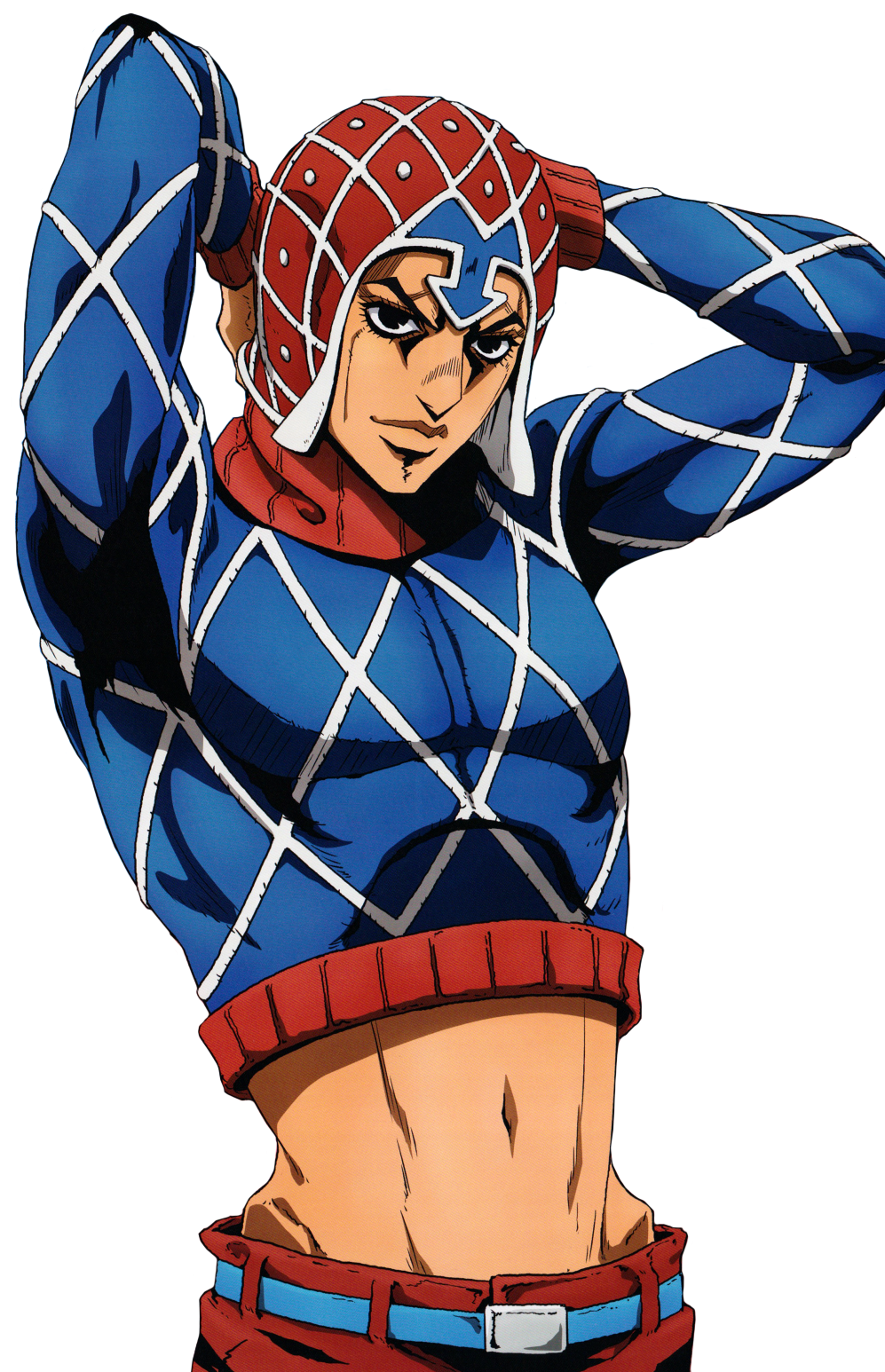 , The Bridges of Madison County

Mista is a member of Passione and by extension Bucciarati's team, who follows Giorno and Bucciarati in their mission to protect the Boss's daughter, Trish Una. He is a gunman and Stand User who shoots down his opponents with the help of his Stand, Sex Pistols.

Mista is a teenager of above-average height and medium build. In contrast to the usual character design, Mista possesses large black irises. He wears uniquely shaped headgear with a diagonal grid pattern and the front shaped like an arrow pointing downward. He is known to keep a lot of things inside his hat, particularly ammunition, as he typically prefers to keep his hands free.[4]

Mista's attire consists of a turtleneck crop top cashmere sweater with a design similar to his hat, zebra striped leather pants that he uses to store his gun, a thick belt, and boots. Due to the quality of the material, he likely spends the most money on clothing out of Team Bucciarati.[4]

Mista carries with him a short-barreled, snubnosed

model, essential to his fighting ability. The revolver is equipped with a hammer shroud, contains six bullets in the swing-out style cylinder and is used with hollow-point bullets. The revolver is consistently portrayed as being purple across adaptations.

Mista comes off as a laid-back teenager, being one of the least serious members of Team Bucciarati, although not as childish as Narancia. His backstory describes him as a carefree individual, whose goal was to enjoy simple, daily, and worldly pleasures such as food or pretty girls.[5] During idle times, Mista can often be seen reading books or magazines.[6][7] His simplicity would be mistaken as idiocy by those that did not know him well, when, in reality, he'd rather not trouble himself by thinking of complicated matters. Mista is also one of the most sociable members of the group, regularly seen bringing random conversation subjects out of nowhere, such as asking if vegetarians would wear leather-based clothing, or if human flesh would taste bad as a result of a natural diet that includes meat.[8][9]

While Mista may act nonchalant, he is one of the most uncivil and violent members of the cast. He often commits violent acts without hesitation, having a history of getting into fights that he would sometimes lose, for the petty reason that someone had badmouthed his favorite movie star.[5] He displays a total willingness to commit outright torture or murder with a casual approach; he hooked Zucchero's eyelid to a fishing line and threatened to burn his retina with the sun,[10] had no hesitation in shooting Sale in the head on sight and leaving him for dead,[11] and threatened to execute Pesci if he didn't answer a question on the count of two.[12] Other such acts include readily sabotaging Narancia's new stereo because the music annoyed him[13] or knocking out a truck driver unwittingly transporting Team Bucciarati when the driver threatened them being discovered. He has also been shown to be very ill-mannered at times, using coarse language and often taunting his enemies when he has the upper hand in battle. He occasionally ogles Trish during his bodyguarding mission and gets Fugo to look at her as well, despite the imagined risks of the Boss finding out.[14]

However, Mista is still a decent individual at heart. He jumped to the rescue of an assaulted woman without hesitation and while he acts rough with civilians,[5] he doesn't endanger them as his enemies do, showing genuine shock at the destruction Green Day causes.[15]

Mista shows a great deal of confidence in his ability, stating that his Stand Sex Pistols is suited for assassination.[10] He often insists on his achievements, first when reminding Fugo that he defeated Sale alone and secured the group's coming to Capri,[16] and later getting upset that Giorno would doubt his swift "victory" against Carne, thinking that he was just that good.[17] However, in the Sleeping Slaves arc, if it came down to needing to save Bucciarati and then being confronted with a problem he cannot solve, Mista would readily beg Scolippi for advice.[18] He also knows better than anyone the limits of his gun and Stand.

In contrast to his usually easy-going attitude, Mista becomes noticeably more serious and proactive when in battle. Connecting with his habit of not overthink things, Mista is a supporter of taking initiative and often advocates for directly confronting his enemies, sometimes to the point of rushing too rapidly to battle.[10] With his direct attitude and a gun-related ability, Mista takes a very straightforward approach to battle, usually aiming for an immediate kill. Nonetheless, most enemies he's faced have had abilities countering bullets to some degree, forcing him to display more ingenuity to fight. Despite his obvious recklessness, Mista displays method in his battles. He regularly applies tactical insight, having accurately deduced Sale's most probable actions during his short hunt,[19] or making an effort to try and find an enemy's weak point, such as finding White Album's airhole,[7] or trying to attack Secco the moment he emerged from the ground.[20]

Moreover, Mista shows great calmness in battle, managing to keep his nerve most of the time despite wounds or even the threat of death.[21] The most notable example of his resolve is when he engages in a direct shootout with Ghiaccio despite the reflected bullets tearing through his body. If given the choice, Mista has no problem coming up with life-threatening moves such as willingly let Ghiaccio hit him to blind the assassin with his own blood, or throwing himself off a building with Rolling Stones in his hand.[22] That calmness has its limits, however, as he started to panic during the final encounter with the Boss.[23]

Mista's most noticeable quirk of character is his severe tetraphobia

: fear of the number 4. If it is mentioned or visible, he will immediately become anxious and paranoid, visibly sweating.[24] Additionally, his Stand, Sex Pistols has bullets labeled 1-7, with 4 omitted. He occasionally displays other superstitious beliefs, for instance saying that urinating close to precious jewels would bring bad karma, or wondering if Giorno is a "lucky boy" that brings fortune to the group. Mista is also stated to believe in God to a fundamental level; whenever he's in danger, he always has thoughts along the line of "I'll certainly be saved!" or "It will definitely pass over!". This, however, is never demonstrated in the manga aside from his character profile.[25]

While Mista is friendly with every member of his group, he has a privileged relationship with Bucciarati or Giorno. Like all members of Team Bucciarati, Mista looks up to Bucciarati in all aspects and has ironclad confidence in him, even trusting Bucciarati to overthrow the Boss of Passione not long after the latter had announced his betrayal.[26] In parallel to his admiration for Bucciarati, Mista builds a partnership with Giorno, being one of the first to realize his talents. In time, Giorno would become perhaps the closest member of the team to Mista, with the two eventually creating a fruitful combination in battle.