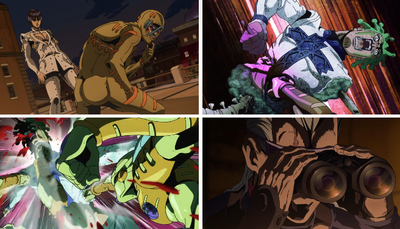 Green Day and Oasis, Part 2 (グリーン・ディとオアシス その②, Gurīn Dei to Oashisu Sono 2)[1] is the thirty-first episode of Golden Wind and the one-hundred-forty-fourth episode of the JoJo's Bizarre Adventure anime. The episode covers from the Chapter 559 to the first half Chapter 563 of the original manga.

The battle against Cioccolata and Secco. While Bucciarati finds himself outmatched by Secco, Giorno and Mista prepare to engage the mad doctor Cioccolata at the top of a tower.

With Cioccolata's helicopter trapped atop a tower, Giorno and Mista run to confront him while Bucciarati deals with Secco.

Still angry for having been tricked back at the coastal village, Secco threatens and insults Bucciarati, who has to correct him on the exact terms of the insult. Secco suddenly remembers he has to prop up his camera, prompting Bucciarati to attack with Sticky Fingers; however, Secco outpaces Sticky Fingers and kicks Bucciarati in the chin. Realizing that Secco is faster and stronger than even Sticky Fingers, Bucciarati cuts up a large piece of the concrete and escapes to the streets below before he's overwhelmed. As the mold has no effect on Bucciarati, Secco decides to simply beat him into a pulp with the power of Oasis.

Sex Pistol No.1 finds the other pistols heavily injured

Atop the tower, Cioccolata sees Giorno and Mista coming for him. Mista shoots five bullets towards the helicopter with Sex Pistols, but they then notice that the helicopter is seemingly empty. The bullets crash inside the helicopter and No.1 commands the others to search the place; suddenly, No.2 and No.3 are cut down, shortly followed by No.6 and No.7. Mista is heavily damaged by the loss of his Pistols while Giorno and No.5 still do not know what happened inside the helicopter; the latter wishes to go in, but Giorno reminds him that he is the only one keeping Mista alive now.

To rescue the rest of Sex Pistols, Giorno climbs up to fight Cioccolata personally; Mista commands No.5 to take a bullet and accompany Giorno. Giorno reaches the helicopter and touches the hull, sensing signs of life within but without a precise location. A punch from Gold Experience makes trees erupt throughout the helicopter, but there is no sign of Cioccolata. Climbing up to the front windows, Giorno sees a variety of bloody medical tools inside; he also notes that the catastrophes caused by the mold have almost reached the Colosseum.

Giorno then sees a heavily injured No.1 and leans forward to take it, but Cioccolata suddenly appears and attacks. Gold Experience counters the first punch, revealing that the former surgeon is nothing but a partial torso with one arm; he quickly dismembers himself even further to escape the punch. Cioccolata reveals that his surgical expertise allows him to rapidly and precisely dismember himself, using Green Day's mold to both animate the severed parts and prevent him from bleeding out. His disembodied left arm ambushes Giorno, almost knocking him out of the helicopter, but the golden-haired gangster catches himself on the wall just in time.

Cioccolata reassembles his body with some quick stitchwork, expressing his twisted views on increasing curiosity as Green Day pummels Giorno right out of the helicopter. Before he can fall, No.5 kicks Mista's bullet through Giorno's hand, allowing it to grow into a tree branch that saves Giorno and gives him a path back to the helicopter. In turn, Cioccolata tilts the helicopter forward to make the branch drop, causing it to be consumed by Green Day's mold. Despite Giorno's best efforts, the branch falls apart beneath his feet, sending him plummeting towards the ground as the mold covers his body. An ecstatic Cioccolata leans out of the helicopter to enjoy the sight of Giorno's despair. However, Giorno kicks part of the branch into the helicopter's propeller, causing it to revert to a bullet which promptly shoots through Cioccolata's head.

The mad doctor collapses on the tree below, seemingly dead, while Giorno catches the edge of the roof and laboriously climbs up. No.5 tells Giorno to heal the wounded Mista, but Giorno suspects that Cioccolata is only playing dead. Vocally predicting Cioccolata's escape plan, Giorno admits that he is wounded but assures him that Gold Experience can still kill him. He offers to show mercy if Cioccolata stays immobile; when there is no answer, he jumps up to the roof proper. Cioccolata immediately awakens and taunts Giorno, revealing that he has detached his left arm and sent it to choke Mista. Declaring his victory, Cioccolata prepares to finish off the gunman when a stag beetle suddenly bursts out of his head.

Giorno admits that he was buying time with his talk, but not for Cioccolata's benefit; instead, he was waiting for Gold Experience's power to transform the bullet he shot into his enemy's head. Once it finished its evolution, the bullet-turned-beetle chewed its way through Cioccolata's brain, leaving him mortally wounded. When a stunned Cioccolata tries to invoke Giorno's deal, the latter simply declares that he was lying; a man like Cioccolata never deserved his mercy. As Cioccolata tries a desperate last attack, Gold Experience delivers a lengthy and vicious beatdown, ultimately sending the mad surgeon into a garbage truck which crushes him. Victorious, Giorno now can turn his worries toward Bucciarati and Secco. He then sees a mobile phone and realizes that Cioccolata has contacted his pet.

While hiding underground, Secco receives a message on his phone; Cioccolata first reports that he will soon take care of the two enemies coming for him, promises more treats to his pet and declares that he will surpass the Boss shortly. Greatly motivated by this news, Secco reemerges to confront Bucciarati, already exhausted from the battle. Unbeknownst to Bucciarati, the man in the Coliseum is already observing him through binoculars.