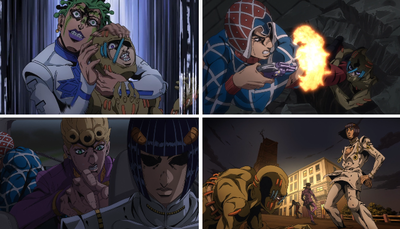 Green Day and Oasis, Part 1 (グリーン・ディとオアシス その①, Gurīn Dei to Oashisu Sono 1)[1] is the thirtieth episode of Golden Wind and the one-hundred-forty-third episode of the JoJo's Bizarre Adventure anime. The episode covers from the second half of Chapter 554 to the first page of Chapter 559 of the original manga.