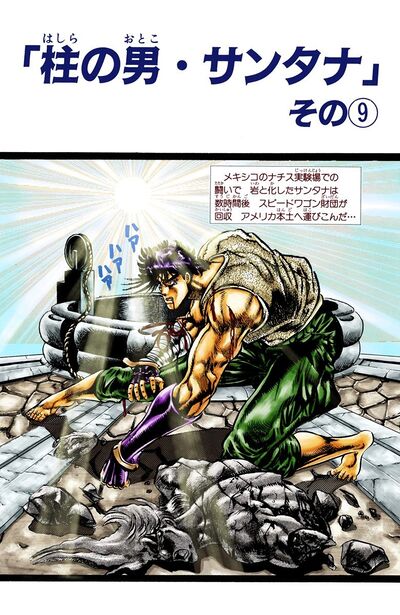 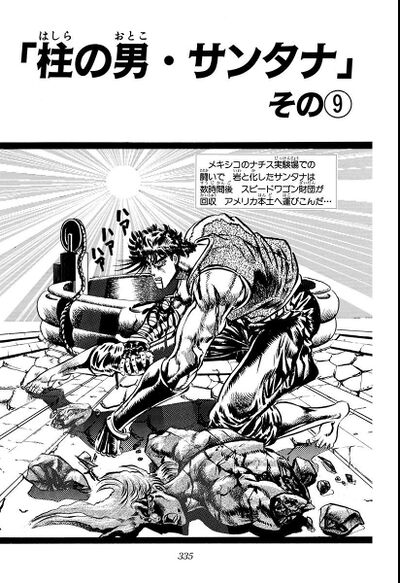 The Pillar Man, Santana, Part 9 (「柱の男・サンタナ」 その⑨, 'Hashira no Otoko Santana' Sono 9), originally The Spaghetti Battle (スパゲッティーの戦い, Supagettī no Tatakai) in the WSJ and tankobon releases, is the eighteenth chapter of Battle Tendency and the sixty-second chapter of the JoJo's Bizarre Adventure manga.

Santana, having been turned to stone, is taken by the Speedwagon Foundation to their headquarters in Washington D.C. There, his corpse is maintained using a new ultraviolet light technology and kept under heavy surveillance. After careful experimentation, Speedwagon and the scientists discover that Santana is not dead but merely preserved in a stone-like state. However, Speedwagon shares a bas-relief showing four horned figures, indicating that the Pillar Men in Europe may be even more fearsome than Santana. Moreover, the staff calculates that they will be awakening shortly following a Mayan prediction. 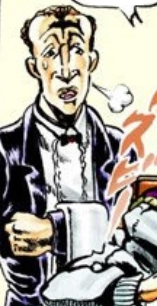