Pronto! On the Line, Part 1 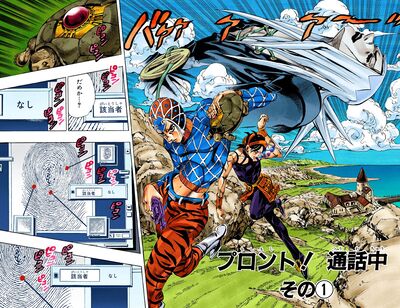 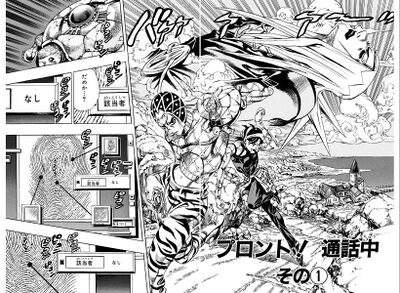 Pronto! On the Line, Part 1 (！通話中 その①, Moshimoshi! Tsūwachū Sono 1), originally The Bow and Arrow!! (弓と矢!!, Yumi to Ya!!) in the WSJ release, is the one hundred twelfth chapter of Vento Aureo and the five hundred fifty-first chapter of the JoJo's Bizarre Adventure manga.

Not long after Abbacchio's death, Bucciarati's group searches for any hint that could lead to the Boss, hacking into numerous police databases to look for potential correspondence with the Boss's fingerprints. Losing hope as they find nothing, the group is suddenly contacted. Bucciarati tells Giorno to halt the connection, but the third party confirms that they are on the same side as Bucciarati, revealing the Boss's true name: Diavolo, and his time erasure power.

The third party invites them to meet in Rome, explaining that the Arrow may unlock a power that can beat King Crimson's time erasure power. Bucciarati accepts the offer and the gang confidently leaves Sardinia. They are however spotted by Doppio, to whom Diavolo orders to look at the landmark on the beach, as the traitors have a too determined look on them to have been truly defeated.

(Corpse only) (Cover only)
Leone Abbacchio