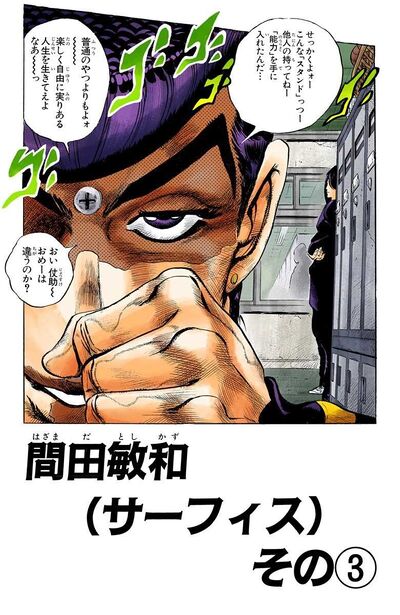 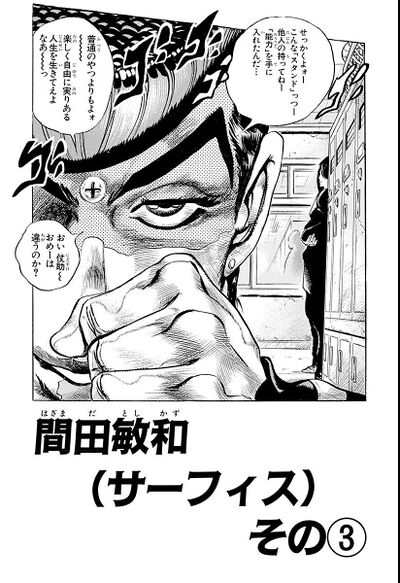 The pen is dangerously close to Josuke's eye, and Hazamada brags about Surface's power, deeming it wasteful not to abuse it and saying that those who aren't with Hazamada or his allies can only leave town or obey him. The sound of Josuke's eye being pierced is heard, and Josuke collapses. Hazamada then reveals himself from behind a locker, and seeing Josuke apparently unconscious, tells Surface to go, as they need to kill Jotaro. However, unbeknownst to them, a sound has been planted on Surface by Echoes, which is the sound "splosh".

Josuke gets up and reveals that he healed Koichi with Crazy Diamond at the same moment he elbowed him, allowing Koichi to summon Echoes and fool Hazamada. After healing him and fixing the door, Josuke and Koichi go out of the school to look for Hazamada. Josuke tries to use a public phone booth to call Jotaro, but Jotaro is already calling someone else. Josuke understands that Jotaro is conversing with the fake Josuke, and cannot look for Hazamada due to the sheer number of phone booths in the neighborhood.

Meanwhile, Surface is claiming that a Stand user is wreaking havoc in town, and asks Jotaro to meet at the train station. Jotaro departs and narrowly misses two calls from the true Josuke at his room and the hotel's reception. Hazamada and Surface then cross path with several of Josuke's admirers, then Tamami, whom Surface knocks out with a brick. Josuke manages to meet the girls and asks where has he gone.