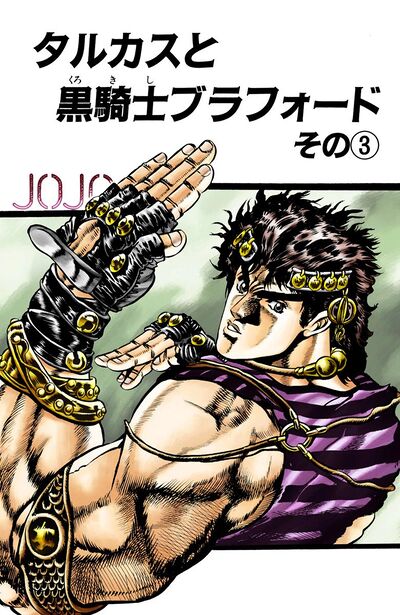 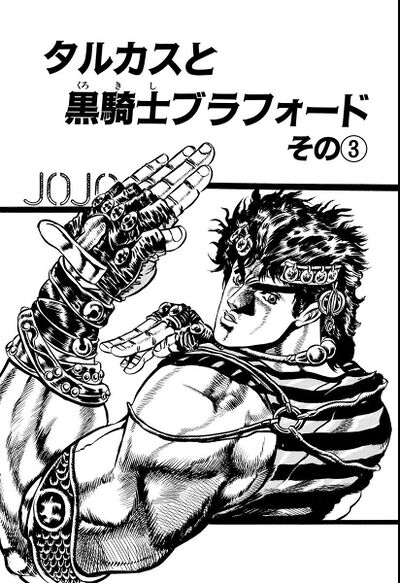 Jonathan is fighting the black knights when a zombie ambushes him from behind. Bruford gets behind the zombie and rips off its nose and the skin around it, before asking Dio to allow him to defeat Jonathan himself. Dio notices that Bruford is acting on his knightly pride rather than his master's orders, but allows Bruford to do as he wishes. Yelling a battle cry, Bruford leaps into the air with both arms behind his back, using his hair to draw his sword and strike Jonathan. It is only thanks to Speedwagon's warning that Jonathan dodges Dance Macabre Hair in time.

Bruford is impressed by Jonathan's ability to dodge his attack. He once used this technique during the trial of the 77 Rings, in which warriors climbed 10 kilometers of mountain road wearing heavy armor and traversing whatever obstacles were presented. In addition, the warrior would fight 77 knights on the way up. Each knight held a golden ring on their armor that had to be taken and worn to prove to the next knight that the warrior had defeated the previous ones. Each warrior would fight normally, however, as the rings accumulated on his armor the weight of the gold would slow him down and strain his body immensely. When the brave knight faces the 77th warrior, he is weighed down by more than 100 kilograms of extra weight. Only five men have survived this great ordeal: Winzaleo, Eijkman, Caineghis, and Bruford and Tarkus themselves. Bruford made use of his Dance Macabre Hair technique to finish the trial.

Wasting no time, Bruford knocks Jonathan into the lake and dives in after him. Zeppeli becomes concerned for Jonathan's safety due to the water preventing him from being able to breathe and likewise use the Ripple. Believing that Bruford will inevitably defeat Jonathan underwater, Dio leaves Zeppeli, Speedwagon, and Tarkus, intending to feed on the lives of the hapless people of Windknight's Lot.

Underwater, Bruford points out that the two of them are equally handicapped; Jonathan's need to breathe and Bruford's armor weighing him down. Wanting to make the duel fair, Bruford says he will not use his sword as Jonathan attempts to swim upward. However, after recalling some childhood advice from his father, Jonathan decides to try something drastic: diving to the bottom of the lake for air to breathe. As he dives, he remembers that there was a coal mine in the area and reasons that there would be pockets of air under the lake's floor from collapsing rubble. Lifting a single rock, Jonathan finds an air pocket and manages to get enough oxygen to create Ripple energy. Jonathan uses his "Underwater Turquoise Blue Overdrive" and lands a hit to Bruford's forehead.

Author's Note
“
I'm surprised at the recent Billiards craze. Not long ago the place was rundown...now it's crowded and you have to wait your turn!
”
—Hirohiko Araki
“
最近のビリヤード・ブームには驚く。ちょっと前までガラガラ…、今は混んで順番待ち！
”
—Hirohiko Araki