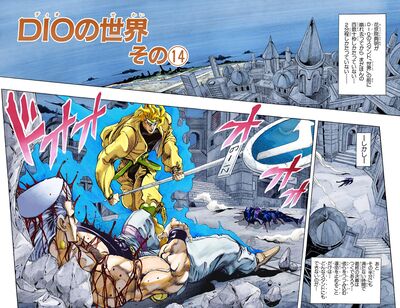 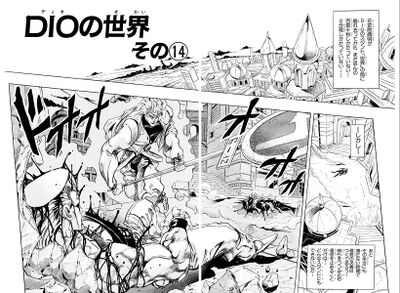 DIO's World, Part 14 (の世界 その⑭, DIO no Sekai Sono 14), originally Confirmation of Death (死の確認, Shi no Kakunin) in the WSJ release, is the one hundred forty-seventh chapter of Stardust Crusaders and the two hundred sixtieth chapter of the JoJo's Bizarre Adventure manga.

Author's Note
“
I talked with novelist Ken'ichi Sakemi in SYOSETSU SUBARU magazine. I was surprised at how very knowledgeable he was about manga.
”
—Hirohiko Araki
“
小説すばる誌上で小説家酒見賢一さんと対談。漫画にとても詳しいので驚きました
”
—Hirohiko Araki