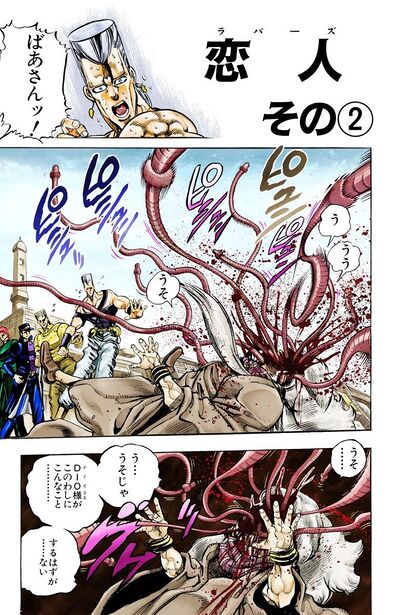 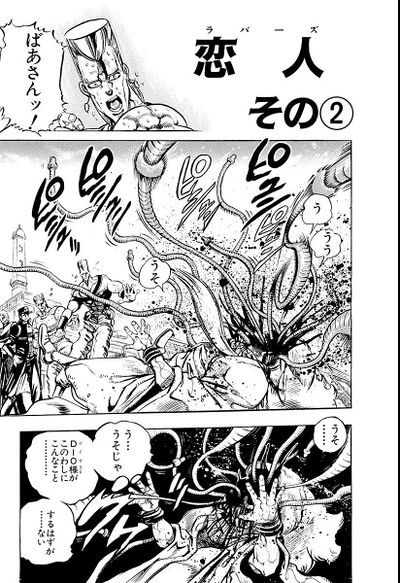 Lovers, Part 2 ( その②, Rabāzu Sono 2), originally Lovers Inside the Head (頭の中の, Atama no Naka no Rabāzu) in the WSJ release, is the forty-eighth chapter of Stardust Crusaders and the one hundred sixty-first chapter of the JoJo's Bizarre Adventure manga.

To prevent Enya's death by DIO's bud spore, Polnareff slices its tentacles with Silver Chariot. However, it is too late. As Enya struggles to stay alive, Joseph asks her what the ability of DIO's Stand is, trying to convince her by saying DIO never trusted her. Enya, however, denies Steely Dan is actually working for DIO, refusing to believe that DIO would betray her. She dies without revealing the secret of DIO's Stand.

Polnareff says that he had mixed feelings about Enya, but he's sure Steely Dan must die. Steely Dan, however, acts like nothing is happening, just sitting down to drink a cup of tea, telling them he can't be touched. He is interrupted in mid-sentence by Jotaro, who hits him with a barrage of punches. As Steely Dan flies away from the attack, so does Joseph. Steely Dan pays a kid to hit him with a broomstick, causing Joseph to feel more pain. It is revealed that Steely Dan's Stand, Lovers, has been inside Joseph's brain the whole time, returning any damage its user suffered. The kid hits Steely Dan again, but is paid back with a punch to the face from an angry Steely Dan, who tells him he didn't pay to be hit twice.

Author's Note
“
I've been wanting to travel lately. Being able to go places where you don't know anyone is the best.
”
—Hirohiko Araki
“
最近無性に旅行がしたい。誰も知る人がいない土地を気ままに旅するのが最高だ。
”
—Hirohiko Araki