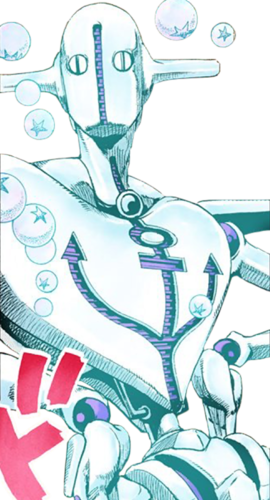 Soft & Wet (ソフト＆ウェット, Sofuto Ando Wetto) is the Stand of Josuke Higashikata, originally belonging to Josefumi Kujo, featured in the 8th part of the JoJo's Bizarre Adventure series, JoJolion. It is a humanoid Stand with a mechanical and sailing theme to its appearance. It can create bubbles that will steal properties and objects. 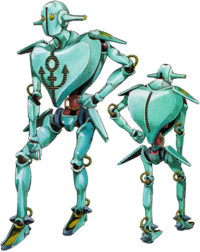 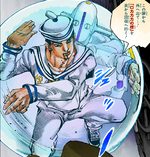 Josuke often takes direct advantage of his bubbles and their properties. The bubbles have some lifting power, allowing Josuke to envelop others like Yotsuyu Yagiyama in a giant bubble and lift them in the air,[4] as well as help him reach vantage points. Josuke has also enveloped himself and allies with giant bubbles to take advantage of their situational protection.

Soft & Wet's signature ability is to "steal something from [an object] and take it for itself", which works in conjunction with the bubbles. Josuke can thus steal aspects or properties of inanimate and living things. Said properties seem to also be smaller objects that come from a bigger object. Soft and Wet can also transfer stolen properties to other objects. Properties Josuke has plundered include:

The stolen objects can stay in the bubble and are still able to bust later (as shown with the bubble with the sound of the light switch).[7] The exact quantity and type of object Josuke may steal, how long he may keep them, and how it is redistributed is currently undefined. According to Josuke, Soft & Wet's ability cannot be applied to himself.[10]

While Josefumi Kujo was in control of Soft & Wet, this ability was described as "absorption". As a stand user, Josefumi was experienced enough to utilize his ability with extreme levels of precision. For example, Josefumi was able to use Soft & Wet at precisely enough to fuse two to seamlessly graft a loose branch onto a different plant, an ability which he and Yoshikage Kira attempted to use for the cultivation of Locacaca.[13] Josefumi was also shown using his soap bubbles to remove excess amounts of black pepper from his bowl of ramen. 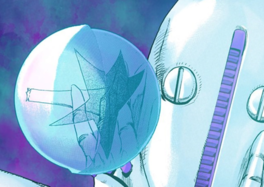 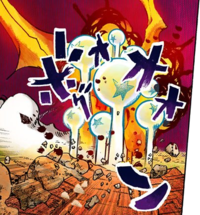 During the fight against Urban Guerrilla and his pet, Josuke seemingly detonates bubbles he had previously buried underground.[14]

It is eventually revealed that his soap bubbles are actually soft lines that spin rapidly. Rai Mamezuku describes this as part of the Spin. During their battle, Satoru Akefu concludes that Josuke has been hiding this power from him, and that this could stop his flow of calamity.