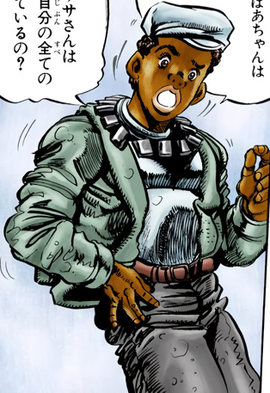 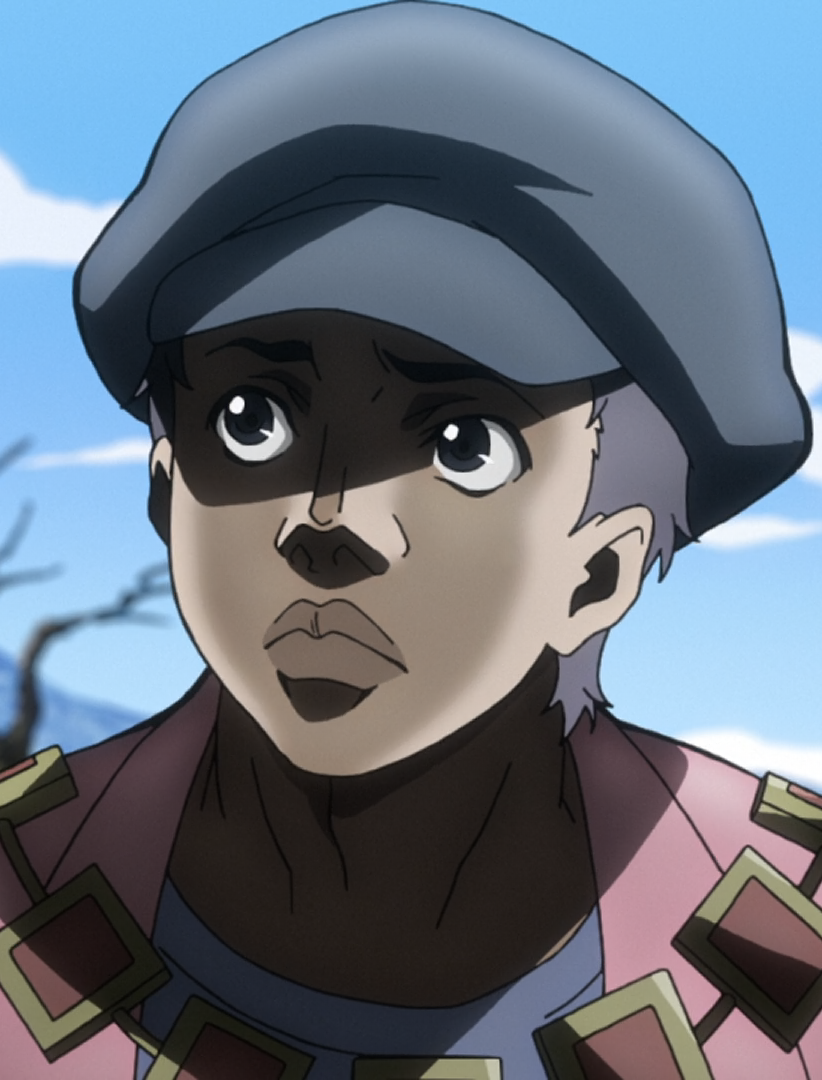 Episode 10 - JoJo of New York
“
What kind of guy is this? He does this to the cops and yet he's afraid of some person named Grandma Erina yelling at him?
”
—Smokey Brown, Chapter 45: Joseph Joestar of New York, Part 1.

He is an ordinary petty thief hailing from New York whose newfound friendship with Joseph Joestar places him at the spectator's seat of the battle against the Pillar Men.

Smokey is a teenage African-American boy of below-average height and medium build. He commonly wears a newsboy cap. His hair is short, save for a braided rat tail.

The series is known for alternating colors between media, the information presented below may or may not be canon.
Skin(Brown)
Hair(Brown)
Eyes(Brown)
Outfit
(Blue-gray coat, light gray shirt and necklace, salmon belt, dark gray pants.)
Skin(Brown)
Hair(Black)
Eyes(Gray)

Smokey first appears stealing Joseph Joestar's wallet. Immediately, he is accosted by a pair of New York policemen, who beat and attempt to extort him. To his surprise, he is saved by Joseph, who makes use of his Ripple in disabling the policemen (comparable to the way in which Dario Brando was bailed out of jail by George Joestar I in Phantom Blood).

At Joseph's battle with Kars, Smokey reappears alongside Speedwagon as a spectator. Upon asking Speedwagon, he is informed of the history of Lisa Lisa and George Joestar II. When Kars transforms into the Ultimate Lifeform and pursues Joseph, Smokey tries to tell Joseph that Lisa Lisa is his mother but fails.

After his adventures with Joseph, Smokey saves enough money for college, where he studied political science. He would later become the first African-American mayor of his home town in the state of Georgia.

.)
In 1950, he was among the beloved family gathered around the deathbed of Erina Joestar, reverently paying his final respects to the woman who gave him a new life.

.)
During the events of the High Priestess story arc, a flyer for a charity peace concert that Suzi Q is attending displays a picture of Smokey, now mayor of New York City, as a sponsor of the event.