The Wind, the Chariot, and Wamuu, Part 8 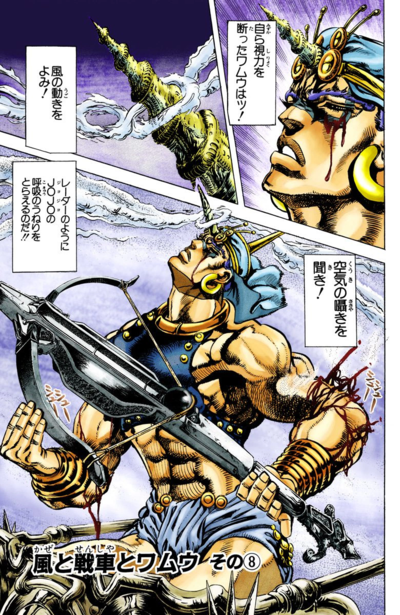 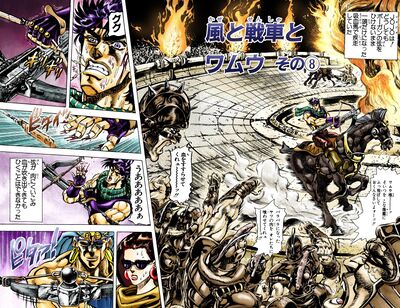 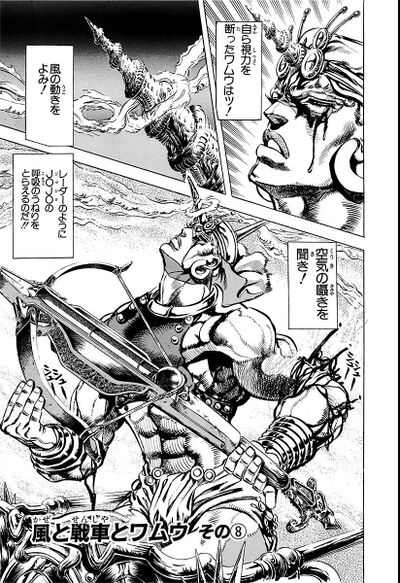 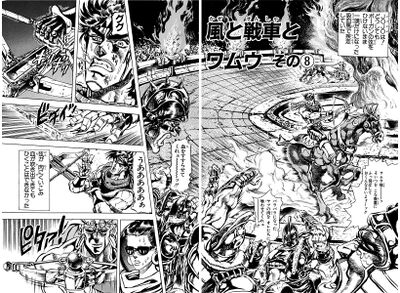 Kaze to Sensha to Wamū Sono 8

The Wind, the Chariot, and Wamuu, Part 8 (風と戦車とワムウ その⑧, Kaze to Sensha to Wamū Sono 8), originally Shoot Symmetrically! (対象点上を撃て！, Taishō Tenjō o Ute!) in the WSJ release, is the fifty-eighth chapter of Battle Tendency and the one hundred second chapter of the JoJo's Bizarre Adventure manga.

Wamuu can no longer use his eyes, but he is far from being blind. By feeling the wind with his horn he is able to sense his surroundings, and locate Joseph from his breathing. With both his chariot destroyed and a horse dead, Joseph is forced to ride on the remaining vampire horse. In the middle of the Skeleton Heel Stone lies a giant lit torch. Joseph rides around that torch, keeping Wamuu on the other side of it. By riding behind the flame, Wamuu has trouble accurately locating Joseph, due to the fire fluctuating the wind. However, by staying in the exact opposite direction as Wamuu, Joseph gives away his position. Wamuu shoots at the arena's wall, causing the bullet to rebound and hit Joseph dead on.

Joseph falls from the horse, the impact bending the string of his crossbow, clicking it into place. As Joseph lies there unable to breathe, Wamuu approaches to finally finish this fight. Joseph attempts to launch the crossbow at Wamuu, but is too weak and fires it in the wrong direction. Joseph, realizing his loss, starts pitifully throwing rocks at Wamuu, insulting the great warrior. But this was all a trick. Joseph used the same trick as Wamuu and rebounded the bullet off the wall, the bullet ripping through Wamuu's chest. And by sending a Ripple through the bullet, Wamuu's fate was sealed.