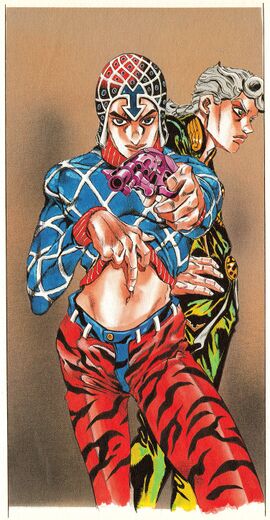 Mario Zucchero is exposed as a Roman Passione member and subsequently tortured, before Moody Blues shows him radioing the group's destination, suggesting that his partner has by now overtaken the group to Capri. Revealing his Stand Sex Pistols, Guido Mista rides with Giorno ahead of the group directly to the Marina Grande

port of the island.

Giorno and Mista manages to lure out the enemy, but he escapes and only Mista is able to follow him. Fellow Passione member Sale reveals his Stand, Kraft Work; capable of freezing objects in place by touching them. Despite Kraft Work's power, Mista manages to lodge two bullets in Sale's head, defeating him.