From JoJo's Bizarre Encyclopedia - JoJo Wiki
Jump to navigation Jump to search
This page is a translated version of the page Sex Pistols and the translation is 0% complete. 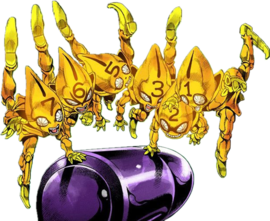 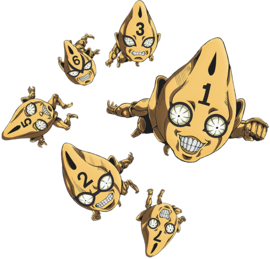 (All Star Battle / Eyes of Heaven)

Sex Pistols is composed of six tiny bullet-like entities (referred to by Mista as "people") living inside a revolver, numbered from 1 to 7, skipping the number 4 (most likely due to Mista's superstitious personality). All of them have teardrop-shaped heads, white eyes with black outlines and small stripes going outward from the center, and extremely small pupils, some of which appear cross-eyed.

In later appearances, they are missing the radial lines in their eyes and their pupils are more focused, in order to make them appear more natural. Frequently, Sex Pistols will open their mouths, revealing crooked teeth. Their "clothing" consists of shirts with pointed shoulder pads, legging-like tight pants with knee pads, and pointed shoes with toe caps that curve upward. Ironically, they each have four fingers instead of five on each hand. However, they have five fingers in All Star Battle, Eyes of Heaven, and the anime.

Mista normally does not reload his own gun but has Sex Pistols reload it for him.[10] For this, he uses a six-chamber revolver. Mista can use any type of firearm, but a chamber allows the Pistols to reload all at once, as reloading a pistol magazine takes more time.[11] Unlike Hol Horse's Emperor, another gun-related Stand, Sex Pistols has no firearm to work with by default and must always be provided a gun and ammunition, since it is useless for offense otherwise. However, each Pistol is able to fire a bullet without a gun by kicking the bullet's primer