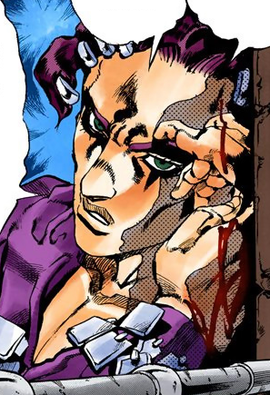 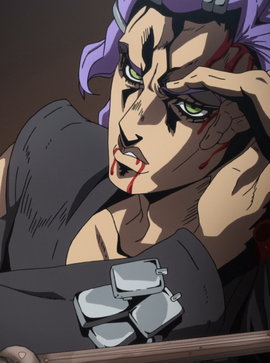 GioGio's Bizarre Adventure
“
We are all slaves of fate. That is the meaning of my ability, Rolling Stones. (われわれはみんな「運命の奴隷」なんだよ。それがぼくの能力「ローリング・ストーンズ」の意味なんだ。Wareware wa min'na `unmei no dorei' nanda yo. Sore ga boku no nōryoku `rōringu sutōnzu' no imi nanda.)
”
—Scolippi to Guido Mista, Chapter 592: Sleeping Slaves, Part 3

Scolippi is a sculptor who gets involved with Team Bucciarati and particularly Guido Mista, as he allegedly murdered his girlfriend and her father has requested the gang to avenge her. Scolippi is a Stand User and his Rolling Stones predicts Bruno Bucciarati's death. 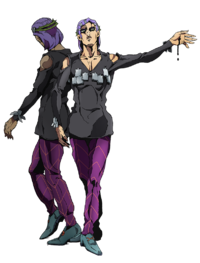 Scolippi is an adult Italian man with a lanky but slightly muscular body. He has straight hair kept at shoulder-length decorated with a row of hair clips and a somewhat prominent bang on the right side. He also uses dark eyeshadow. Scolippi wears a plain shirt decorated with metal plates on the chest and holed at the shoulders, and dark trousers with a spiderweb motif. His crown of thorns and the hand injury he receives from Guido Mista may be reminiscent of Jesus Christ

Scolippi appears to be somewhat withdrawn and meek, yet benevolent. He is said to have avoided showing himself to his girlfriend's father despite having a committed relationship with her.

Scolippi calmly puts up with Mista's violent intimidation attempts, explaining how his powers work. Because Rolling Stones' nature allows him to know whether or not he's fated to die, he is able to keep remarkably calm even with a gun in his mouth, knowing that he will survive any given situation. Despite having been mistreated and misunderstood by both his ex-girlfriend's father and the assassins sent to kill him, Scolippi bears none of them any ill will, as he sees people as puppets who are unable to escape their fates. He even prays for Bucciarati's assassins when his Stand cannot chase them down anymore. Scolippi is a firm believer in Fate.

Scolippi is a Stand user wielding the spherical rock-like Stand, Rolling Stones, which follows those fated to die and divines their destined deaths, as well as offering them an immediate and peaceful alternative.

As a child, Scolippi suddenly discovered his stand Rolling Stones and learned of its abilities. He later became a professional sculptor, not attaining fame, yet still making a decent living.

Eventually, Scolippi's girlfriend would touch Rolling Stones, and decide to kill herself in order to preserve her organs, as her father would need them to heal from an illness.

In the elevator of his building, Scolippi encounters Mista, who has come to investigate the matter of Scolippi's girlfriend's death at the request of her father. Mista quickly begins his rough interrogation within the rising elevator. Answering Mista's questions, Scolippi explains that he's a sculptor with no knowledge of Stands other than his own ability, which acts independently and has followed Bucciarati. Skeptical, Mista shoots Scolippi's hand, but suddenly notices that Rolling Stones has disappeared. He holds his gun to Scolippi's cheek as Scolippi explains that Bucciarati's fate has been sealed, much as Michelangelo believed that a sculptor's purpose is simply to free a statue's predestined form from the marble. Mista has no patience for this, and tries to intimidate Scolippi into bringing back the stone by forcing him to play Russian Roulette. Scolippi divulges that Rolling Stones predicts future deaths and confronts its targets, offering them a peaceful alternative when they touch it; claiming that this is the true cause of his girlfriend's death. 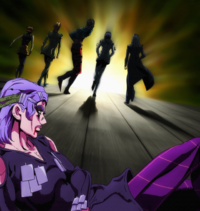 Mista attempts to shoot Scolippi in the mouth, but his gun misfires, as Scolippi isn't yet fated to die. After pistol-whipping Scolippi, Mista leaves the elevator to pursue Rolling Stones and save Bucciarati.

Scolippi watches as Mista jumps from the building's seventh story in order to reach and destroy the stone. As the gang leaves the area, he notices that, as he tried to explain, Mista has not prevented Bucciarati's death: Unbeknownst to the departing gangsters, the rubble takes the form of Abbacchio and Narancia as well, signalling their future deaths. As a silver lining, Scolippi notes that Mista was ready to die for his leader and, admiring this determination, hopes that the youths' arduous road will fulfill some purpose.