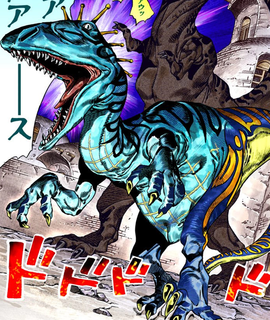 Scary Monsters (スケアリー・モンスターズ, Sukearī Monsutāzu) is the Stand of Dr. Ferdinand, featured in the 7th part of JoJo's Bizarre Adventure, Steel Ball Run. It is an ability that allows its user to turn others into dinosaurs.

Following Ferdinand's death, Diego Brando retains the transformation ability through the power of the Saint's Left Eye[1] and, as a result, develops his own version of the Stand.[2]

. He gains stripes spelling out "DIO" all over his body and his hair turns into spikes that end in round, ball-shaped tips on the back of his head. Traces of his checkered shirt are still visible on his chest.

After being under the influence of the Stand for a while, Diego is able to turn into a more humanoid hybrid form while still retaining sharp teeth, claws, dinosaur legs, and a tail, with a deranged expression on his face.

As the Stand is bound to Diego's body, its appearance is based on the form he takes.

The dinosaurs created through Scary Monsters are blue and brown in the case of the small ones in all media featuring it colored.

By partially transforming, Diego can use the enhanced senses and strengths of a dinosaur. He possesses increased stamina, strength, and speed, enough to compete with Dirty Deeds Done Dirt Cheap.[9] Moreover, transforming into a dinosaur grants him vision based on movement: the faster something moves, the better Diego can perceive it and thus the better he can avoid it. But as a result, he becomes vulnerable to slow attacks.[7]