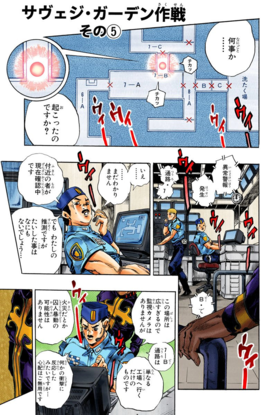 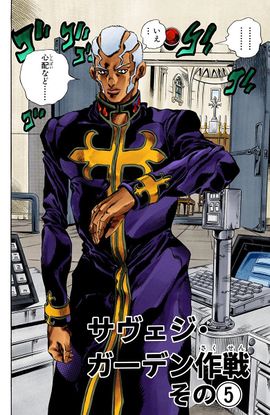 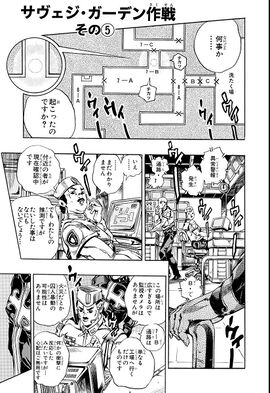 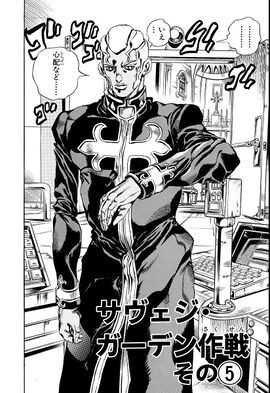 Father Enrico Pucci inquires about the disturbance in the hallway leading to the factory, the security guards reply that they're unsure, as there are no cameras within that hallway. Pucci assures them that there should be no trouble, and that he has complete faith in the prisoners and staff. Pucci looks at a computer displaying outgoing calls, requesting to listen to the call that went to the Speedwagon Foundation.

In the factory, everything else that has lost its weight is being sucked into holes in the wall. Jolyne worries about suffocating due to there being no air pressure, but Weather explains that their blood will boil long before they get the chance to suffocate. More projectiles launch toward Jolyne, which she deflects with Stone Free. Weather grabs Jolyne, and, using Weather Report, creates cloud suits for them to breathe. Weather hides behind some machinery, causing Lang to come out and look for them.

Weather explains that the air in the cloud suits will only last them two minutes. Unfortunately, Lang has gone back into hiding. Jolyne notices that there are some objects that remain on the ground in the distance, concluding that Jumpin' Jack Flash's ability has a limited range. She deduces that Lang must be hiding over there so he can breathe. Weather flies over, but Lang launches projectiles from behind. Stone Free deflects most of them, only one hitting Weather in the leg. Lang flies past, trying to escape the factory.