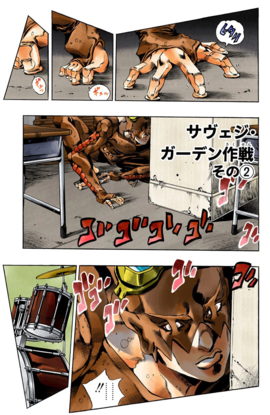 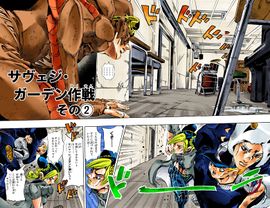 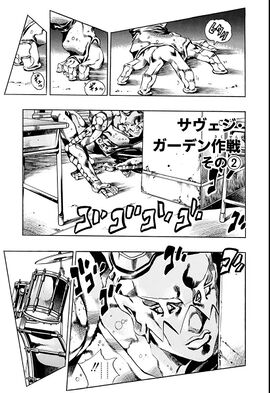 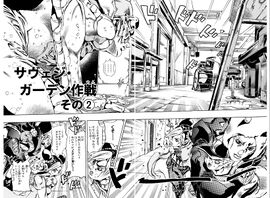 Jolyne, Emporio, and Weather Report dash out of the music room in order to get away from the enemy following them. Jolyne recommends fighting him now, but Emporio exclaims that he couldn't know about the Savage Garden Strategy and thus it's better to hide from him. The enemy, known as Lang Rangler, spits onto the ground, which somehow causes his speed to increase. He spits again, this time onto Jolyne. The group turns a corner and hides in a ghost room within a jacket hanging on the wall.

Having lost his prey, Lang walks away in search of them. Emporio goes over the plan for Jolyne. He explains that Weather will enter the factory first, and meet up with Jolyne. From there, the two will enter into the courtyard by force and hand over Jotaro's Stand Disc to the Speedwagon Foundation. Jolyne successfully bribes the guard in front of the factory entrance. However, when the guard turns around, the money floats back to Jolyne. The cup and saucer on the guard's desk also attract themselves toward Jolyne.

Jolyne runs into the factory, but becomes suspended in mid-air. Everything Jolyne touches becomes suspended in the air, as if the room had lost its gravitational pull. The Stand Disc begins to float away. Jolyne tries to retrieve it, but she is unable to control her string's trajectory in zero gravity. Suddenly, Lang appears, effortlessly maneuvering the zero gravity zone and heading for the disc.