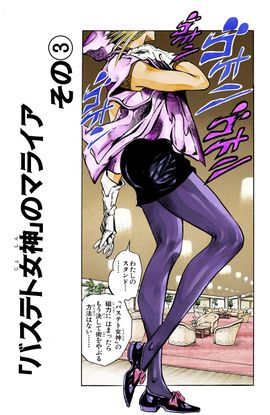 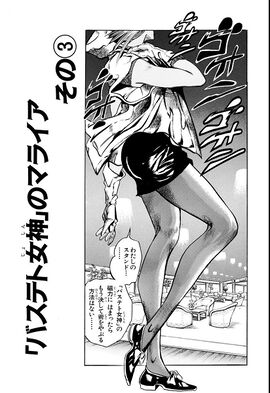 Joseph begins panicking as Mariah's jewelry, stuck in the escalator, strangles him. He yells for help but it goes unheard by anyone who cares. He tries to use his Hermit Purple to press the emergency stop button, but in his panic is unable to find it. Joseph begins crying and shouts in remorse over his pathetic death as Avdol presses the emergency stop button. Once Joseph realizes what's going on he nonchalantly stands up and warns Avdol of Mariah. As he explains her magnetic ability he spots her and begins his chase. Avdol follows him into the ladies room, and the two sneak peeks into the stalls in search for Mariah, her beautiful legs being the only thing to go on. Once they realize she's not in there they quickly escape from the women angry at their tomfoolery.

Out in the street, the two chase after Mariah. Joseph warns Avdol about Bastet the electrical outlet of love and attraction, however, Avdol states that he had already touched Bastet when he turned off the escalator. As the two continue their chase they realize that they are attracting to each other, and trip falling on their now conjoined faces.