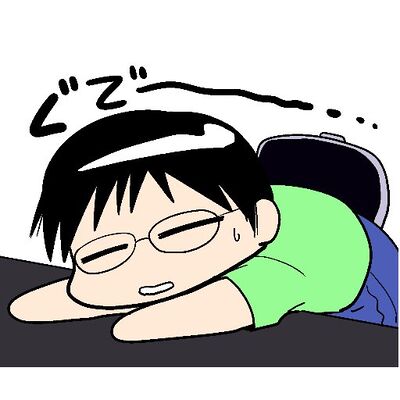 Reki Taki (滝 れーき, Taki Rēki) is a Japanese manga artist credited for his work on the TV adaptation of Stardust Crusaders, Diamond is Unbreakable, Golden Wind, and Stone Ocean by David Production. He was one of Hirohiko Araki's assistants during Battle Tendency and Stardust Crusaders.[3]

Reki Taki became an assistant of Araki when he was 20 years old in around May 1988. He was already interested in joining the industry and primarily became motivated after seeing the way Araki draws his backgrounds. However, he had difficulty doing his tasks when he just started and was often scolded by Araki.

After one year and three months, he resigned from being an assistant. By sheer coincidence over two decades years later, he got involved with JoJo's Bizarre Adventure: Stardust Crusaders. From then on, he has been employed to work in the following anime seasons and the Thus Spoke Kishibe Rohan OVA, primarily as a background artist.[4] 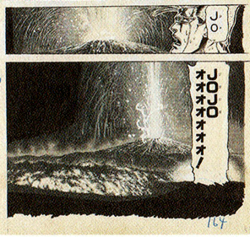 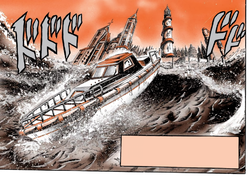 Boat drawn by Taki early in his career (Chapter 81)[5]

How was your experience with Araki-sensei? Did you enjoy working with him?

I started working as an assistant to Araki-sensei when I was 20 years old, around the time of JoJo “Part 2“. It was definitely a very fun job. I was happy to be in the industry that I had always dreamed of. ✨

However, I was still an amateur back then so I had a hard time doing my tasks. 💦

Backgrounds bear an important role in presenting the world of the work, particularly in JoJo. I was desperate to learn the job. Araki-sensei often scolded me. 😅

In the end, I retired from the JoJo manga after 1 year and 3 months. I had a lot of hardships, but it’s been immensely useful for me now‼️😊

How do you feel about your contributions to the JoJo anime? How did this experience affect you?

Am I still capable of drawing backgrounds for JoJo? How would I draw them after it’s been so long? Those are the kinds of thoughts I had while working. I resigned from being an assistant for the original work halfway through, so I’m glad to be able to contribute to the JoJo series through the anime now. 😊 I’m learning a lot. ✨

Do you enjoy working on “Stone Ocean”? What episodes has your work been featured in?

Of course, working on Stone Ocean is fun‼️ Although since it takes place in the closed space of a prison, it sometimes feels oppressive to draw compared to the backgrounds of Morioh Town in Part 4 or Naples in Part 5. 💦

I’ve been working with the other background line art staff to draw the backgrounds for various parts of Green Dolphin Street Prison. So, the places that I was in charge of appear nearly all the time. 😊

Do you have any plans to work on other works by Araki-sensei in the future?

That’s still undecided. I’d definitely do it if I ever get the chance to work on JoJo, Rohan, or anything else‼️

Who are your favorite JoJo characters?

…I think that’s about it⁉️😊

This is another tough question. 🤔

I’ve been a fan since the first and second parts of the manga, so…

I was fascinated. I was particularly drawn to the way Araki-sensei drew his backgrounds, which was a major motivation for me to become his assistant‼️

In Part 3 and beyond:

I guess that’s the gist of it⁉️ Of course, JoJo still has an endless amount of charm‼️😆

I want to visit there someday‼️✨