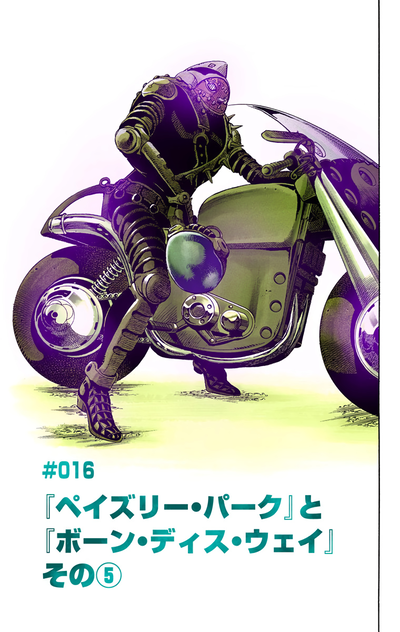 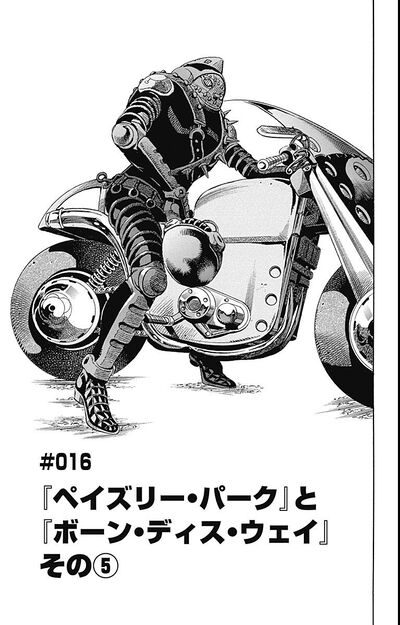 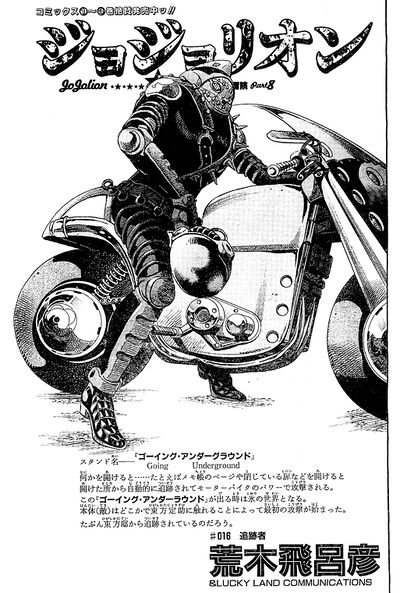 "Paisley Park" and "Born This Way", Part 5 (『ペイズリー・パーク』と『ボーン・ディス・ウェイ』 その⑤, "Peizurī Pāku" to "Bōn Disu Wei" Sono 5), originally The Pursuer (追跡者, Tsuisekisha) in the UJ release, is the sixteenth chapter of JoJolion and the eight hundred sixty-third chapter of the JoJo's Bizarre Adventure manga.

As the biker continues his attack, Josuke realizes that with their continued trajectory, the Stand will eventually collide into a metal pole. Seeing no risk in opening the phone, he asks for another route. As soon as he does, the phone calls the taxi driver, allowing Josuke to tell him about the open door of his taxi. With the taxi's door closed, the biker disappears, but Josuke manages to follow the Stand's trail of sounds and fragrance using Soft & Wet to find the User.

The user is none other than Kei Nijimura, who insists on killing him if he persists on visiting her mother, Holy. Josuke chooses to end the fight, reassuring Kei that he will not go to the hospital if she truly does not want him to go. At this moment, Kei realizes that Josuke has honestly lost his memories and he knows nothing about her or their past. She asks Josuke to let her see his tongue, and questions him about his amnesia. Upon future inspection, she informs Josuke that he has seams going down the middle of his eyes and tongue, proving that (similarly to his testicles) he in fact has four eyes and two tongues.

Author's Note
“
This super-friendly Doberman walks around my neighborhood, but I don’t trust it. I just can't.
”
—Hirohiko Araki
“
超人懐っこいドーベルマンが近所を散歩してるんだけど、僕は信用してない。できるわけない。
”
—Hirohiko Araki