From JoJo's Bizarre Encyclopedia - JoJo Wiki
(Redirected from Picked Up Something Bad! (2))
Jump to navigation Jump to search

We Picked Up Something Crazy!, Part 2 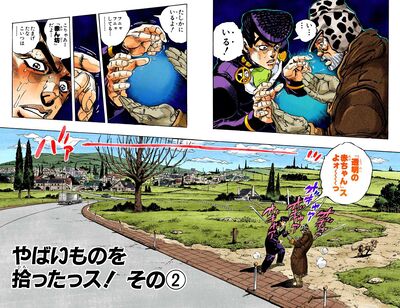 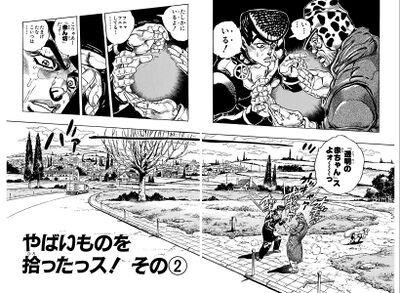 We Picked Up Something Crazy!, Part 2 (やばいものを拾ったっス！ その②, Yabai mono o Hirotta ssu! Sono 2), originally Two Men and a Baby!! (ツーメン＆ベイビー!!, Tsūmen & Beibī!!) in the WSJ release, is the fifty-first chapter of Diamond is Unbreakable and the three hundred sixteenth chapter of the JoJo's Bizarre Adventure manga.

Joseph Joestar and Josuke Higashikata are now in presence of an invisible baby. Josuke has many questions, not knowing who and where the mother is, wondering who would make a baby invisible. Joseph theorizes that the baby could be the Stand user, and unconsciously developed its ability. They need to find the baby's mother but are first distracted by more immediate concerns, such as the fact that the baby girl (as Joseph discovered) is naked and just pooped in his hand. They go buy baby equipment at a specialized store, but Josuke is too embarrassed to go inside, reasoning that people will begin to misinterpret if he is spotted buying that kind of equipment. As Joseph only has dollars in his credit card, he takes Josuke's card and heads inside the store. However, the store owner overwhelms Joseph with information about the possible diapers, baby bottles, nipples, and baby clothes he can buy, and he ends up spending over 130,000 yen. Later, Joseph and Josuke clothe the baby and, in order to make her more visible, apply makeup on her. However, she soon disappears again, rendering herself invisible as well as her clothes, makeup, and Joseph's hands which were holding her at the time.