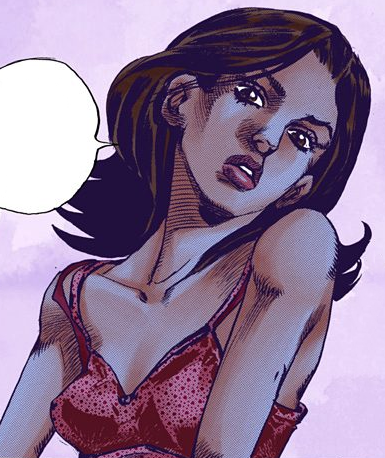 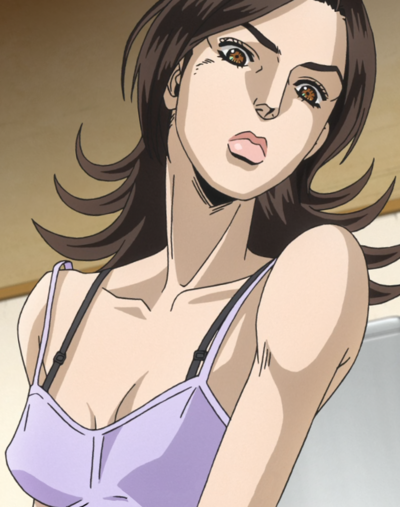 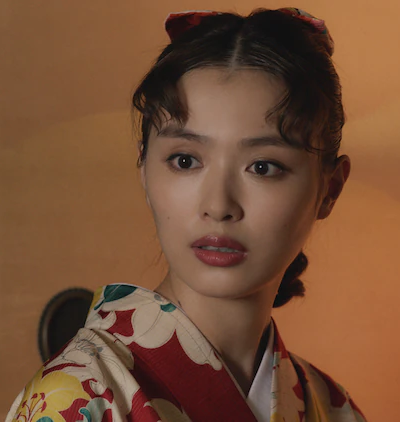 TSKR Episode 2
Episode 2: Mutsu-kabe Hill
“
You look so precious while you sleep... Gunpei. I alone, now and forever... have to take care of you.
”
—Naoko Osato, TSKR Episode 2

She is the heiress of a wealthy family whose life takes a turn for the strange when she accidentally kills her secret lover, Gunpei Kamafusa.

Naoko is a woman of average height and slim build. She has above shoulder-length wavy dark hair and soft-angled eyebrows. She wears a dress with a polka dot pattern in the manga, and a plain dress in the OVA.

When she is older, she wears a frilly tank top with a collared shirt on top along with a skirt.

In the TV drama adaptation at the time of Gunpei's death, Naoko used to wear a red kimono with a white flower motif completed with an obi with a checks and flower pattern. Her hair was tied in a ponytail. In the present, she wears a dark grey suit with short sleeves and an assorted skirt, complete with a transparent black shawl. She ties her back back into a tight bun.

Naoko Osato is part of a rich and prestigious family. All her life she's mostly submitted to her doting and overprotective parents who disallowed her from living on her own and even always had a chauffeur drive her to school. When she was betrothed to a man named Shuichi during her youth, she accepted her fate without protestation. Nonetheless, Naoko secretly starts a relationship with her family's part-time gardener, Gunpei Kamafusa.

However, as her wedding date with Shuichi approaches, Naoko becomes afraid to continue committing to her affair and starts distancing herself from Gunpei. Knowing her father would never approve of their relationship, Naoko tries breaking up with Gunpei for her own sake.

She is quick-witted, thinking of various ways to try hiding Gunpei's corpse and stopping his leaking blood after she accidentally kills him, such as stitching and cauterizing his wound. Desperate to hide her crime, she goes as far as letting Gunpei's blood flow into her mouth while she has her back turned to Shuichi. She eventually becomes obsessed with Gunpei's corpse and secretly takes care of it for several years even after she is married, feeling more passion for the corpse than her own husband.[1]

Naoko Osato is the only daughter of a wealthy family of a lineage that had been successfully producing miso for 300 years. Their mansion is located at the end of a small road surrounded by mountains, all of them belonging to the Osato family. Her overprotective parents wouldn't allow her to live alone in S City, where her school is located. Instead, they have a driver take her to school for her entire ten years of middle school, high school, and college, even though the trip takes two hours to get there. Her family arranges to have her marry Shuichi after graduation, but Naoko falls in love with the gardener Gunpei Kamafusa.

She is currently in her final year of college, but Naoko has to keep her relationship with Gunpei a secret because her overprotective father would never allow them to be together. However, Naoko starts distancing herself from Gunpei in September, a few months before her marriage set in the following spring. While Gunpei is playing video games at her house, Naoko looks out the window and sees Shuichi and her father approaching the house. She quickly hides her and Gunpei's teacups and asks if he can leave. She gives Gunpei an envelope full of money, but when she mentions they have to break up, they get into a fight which ends with Gunpei pushed towards a golf club and killed by the impact. 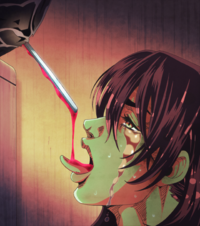 Naoko drinking Gunpei's blood to hide it from Shuichi

She initially thinks that Gunpei is playing a joke on her but realizes that he died and quickly tries hiding her crime. However, Gunpei's blood starts continuously leaking out from his body to the point where he shrivels up. Shuichi and her father arrive at the door and, despite her efforts, Naoko is unable to contain the continuous blood coming out of Gunpei's body. She tries to get her father and Shuichi to wait at the main house but Shuichi stays behind, suspicious because he thought he saw another silhouette with Naoko inside. Naoko tries stitching Gunpei's wound and then cauterizing it but both methods fail to stop the blood from flowing. With no choice, Naoko hides his corpse on top of a fridge and pretends that she was cleaning the kitchen just as Shuichi enters the house. In reality, she had Gunpei's blood leaking from the top of the fridge into her mouth so that Shuichi wouldn't notice.

Since then, she hides Gunpei's body in a guest room and secretly disposes of his blood each morning by having it flow into a glass bottle. Naoko marries Shuichi in spring and continues her daily routine of attending to Gunpei's corpse. Even though all signs of life had left his body, he seems to be "continuously dying". Naoko noticed his face would turn back to normal for a few moments if water was sprayed at his face. Still in love with Gunpei, Naoko somehow ends up pregnant from his corpse and gives birth to a daughter and son. Despite having no passion toward Shuichi, she lives a happy life with him and her kids.[1]

Naoko coincidentally comes across Rohan Kishibe while he is researching at Mutsu-kabe Hill. Rohan uses his Stand Heaven's Door on her for his research about yokais, leading him to discover that Gunpei was possessed by one. He later learns that Naoko's daughter is also possessed by one as it is the child of the one possessing Gunpei.

After Rohan prevents Naoko's daughter from dying, she runs back home and asks her mom if she thinks she'll ever marry a wonderful person. Naoko responds that she's sure her daughter will if she's a good girl.[1]

Naoko's story in the TV Drama adaptation is largely the same as in the original one-shot. However, some details are expanded upon. In the past, it is shown that Naoko discovered that Gunpei's corpse would regain his original appearance when splashed with water by accident. The night after she killed Gunpei, she tried to secretly drag Gunpei out of her private apartments and knocked on a table, letting a flower pot fall on Gunpei and splashing him with water.

In the present, Naoko Osato sees Rohan as she returns to her house and asks for an autograph of him for her son. They go to the local inn where Rohan draws an autograph and she tries to inquire about his interest in the mountains. Rohan then finally uses Heaven's Door on her and reads her story, discovering the truth about the Mutsu-kabe Hill.