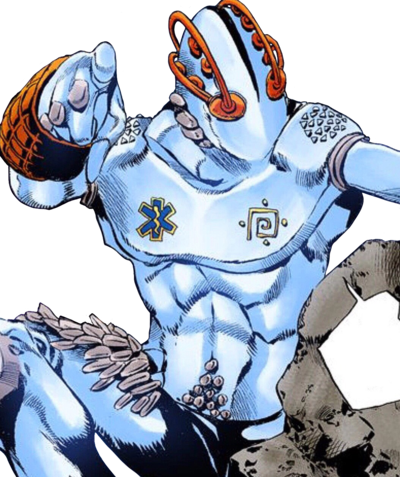 The series is known for alternating colors between media, the information presented below may or may not be canon.
Body
(Light blue body, blue badge, orange appendages and armbands, gold and gray accessories.)

Although Under World's versatility allows Versus to be equipped with a wide array of actions to his advantage, the Stand has limited fighting abilities. Oftentimes, Versus is left defenseless when fighting another Stand user through brute strength. The Stand and its user are vulnerable to damage even while unearthing memories, as seen when Jolyne's Stone Free injures Under World by pinning it with a plane part while the group was trapped in a memory of a passenger plane.[1]

Under World's ability is to excavate memories of events and people from the past through the assumption that the ground contains a memory of anything that happens upon it.[2] Versus uses this to summon any historical event that happened in Orlando, Florida[3] by digging through and uncovering the soil, and later trap anyone in it. Memories include, but are not limited to car crashes, shootings,[4] plane crashes,[5] NFL football games,[6] minerals,[6] and even people involved in the event.[7] As long as Under World is not interrupted from digging up the ground, Versus can create a reenactment of the event and can also be granted knowledge of the past.[3][8]

The memories of individuals who experienced the original event are aware of their status yet do not mind it, such as when one stewardess calmly informs Jolyne of their plane's impending crash.[2] These memories are also composed of the earth and can be seen by non-Stand users. As such, if anyone is caught in an event, they will experience what has happened in the past and cannot interfere or change anything in any form. For example, if one is caught in a memory of a plane crash, they will inevitably experience said crash and die.[9] To avoid this, one must find a loophole or condition within the memory, such as an area where nobody died or was only injured.[7] Individuals who did not die in the original event will also not die.[1]

Apart from trapping people in lethal events, past individuals within the memory can be interrogated for information.[10] Anything caught in the original memory, such as stray bullets, can also indirectly attack victims within the vicinity without having to trap them in the event.[5]