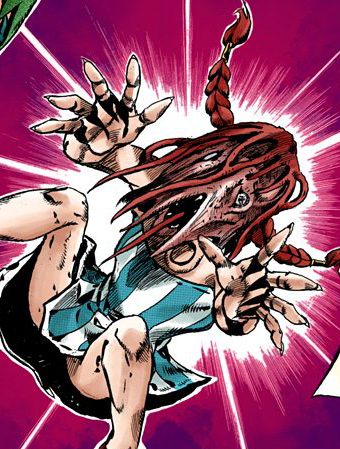 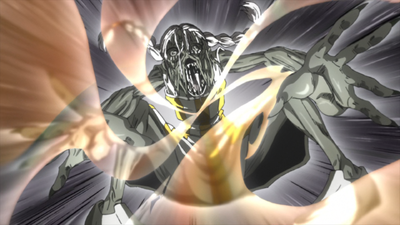 Dying in front of someone.

TSKR Episode 2
Episode 2: Mutsu-kabe Hill
“
The pinnacle of happiness for this creature is... to die in front of someone!
”
—Rohan Kishibe about the Mutsu-kabe Hill Yokai

Known as a yokai, it is a lethal creature whose sole purpose is to proliferate. There are potentially several of them. Rohan Kishibe named it based on the location he found it in, Mutsu-Kabe Hill.

The yokai has bulging eyes and cracked skin. The corners of its upper lip extend below its mouth. It has several fangs, a long, sharp tongue, and sharp nails.

The one possessing Naoko's daughter has braided pigtails and wears a striped dress. When it dies, its vessel's eyes shrivel up.

This creature feels the most happiness when they possess an unknowing individual and then unexpectedly die in front of somebody else from an arbitrary accident. Thus, their witness suffers from guilt as they think they were responsible for murdering the person. After that, the yokai possesses the witness while making its previous host bleed forever. By exploiting human love and spiritual weakness, it forces humans to attend to their needs, ensuring the yokai doesn't need to bear any manual labor, responsibility, hardships, or other struggles itself.[1]

The yokai is capable of possessing other organisms. After they die in their vessel, their corpse will still continue to bleed eternally, with 300cc flowing out each day despite all biological functions in their body being stopped. Although their skin would shrivel, it would not rot after several years nor have a stench. If water is poured on them, their skin would momentarily return to how it used to look when the body was alive.[1]

They can impregnate another human being despite their vessel being dead, possibly from exposure to their blood.

According to Rohan Kishibe's research, the yokai is from possibly thousands of years ago. Its only purpose is leaving descendants. The few yokai left on Earth may be anywhere, dying in front of someone on purpose. Gunpei Kamafusa is possessed by one of them, causing Gunpei to die in front of his lover, Naoko Osato. Naoko drinking his blood in an attempt to make the blood stop leaking out of his body leads to the yokai impregnating her with its descendants. 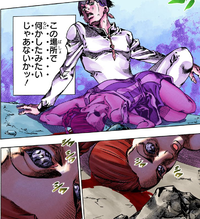 Dying in front of Rohan

After learning about Gunpei's story, Rohan investigates the region around Naoko Osato's house to discover his goal, suspecting him to be a yokai. Rohan comes across a young girl, who tells him she's not allowed to talk to strangers and runs away. Rohan tries to catch her, but she ends up falling on the ground and hitting her head on a rock, bleeding profusely like Gunpei did when he died. Rohan realizes this girl is actually Naoko and Gunpei's daughter, surprised that the man who became a corpse was able to impregnate her after his death.

Rohan discovers that the girl is possessed by a yokai, which tried to die in front of him in order to possess him. With Heaven's Door, he writes one last memory before the girl dies: "I don't know Rohan Kishibe. Even if I meet him, I won't see him". The yokai briefly shows its true form in order to possess Rohan, but stops its attack and returns back to the girl's body after being unable to see him. The girl remains alive due to the yokai's return and leaves the area, while Rohan comments to himself that if he was one second late, he would have been possessed or exterminated by the yokai. After naming it the "Mutsu-kabe Hill Yokai", he declares his research complete.[1]