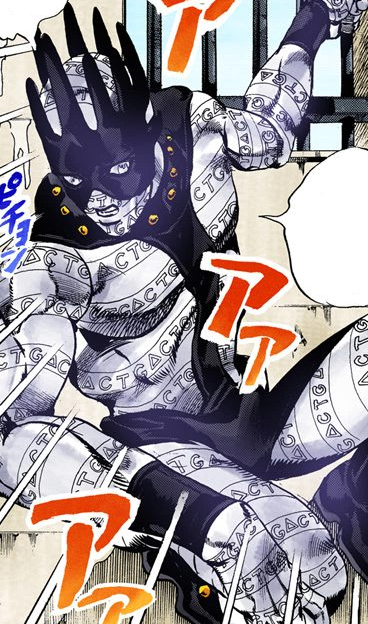 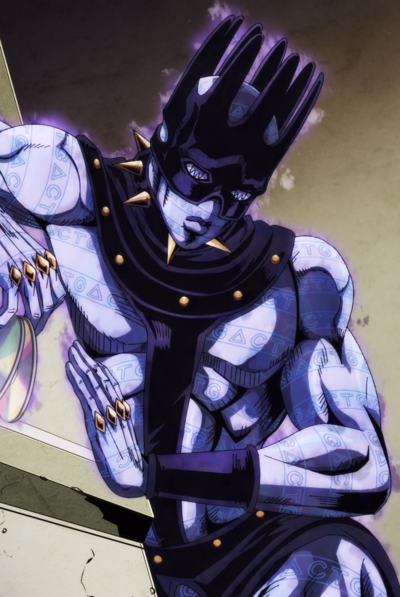 SO Episode 4 (Ability only)
SO Episode 5 (1st full appearance)

Whitesnake possesses the ability to create illusions and extract mainly two types of DISCs from a person's psyche which can then be inserted into someone else's head, allowing them to either see the DISC owner's memories or use their Stand.

Whitesnake is a humanoid Stand of a height and build similar to Pucci's. It is sparsely clothed in black, with a mask covering its face to the bottom of where its nose would be, in a piece that rises above its head by half its height in a row of peaks, like a crown. Its attire is based on Araki's image of an executioner.[1] Its light skin is marked by horizontal stripes of roughly an inch's height, with "GΔCT" (after the four nucleobases of DNA) repeatedly written on every other stripe. Its irises are also unique, appearing as if they are melting.

The stand is seemingly capable of controlling people's minds through direct contact. During the Heavy Weather fight, Whitesnake takes control of Anasui's mind forcing him to guide Pucci through dangerous blood spikes.[3] It's unclear whether this is a separate ability or an extension of DISC creation.

Whitesnake's primary ability is to manipulate spirits through the use of special DISCs.[4]

Whitesnake can first and foremost extract a portion or the entirety of a person's psyche out of their bodies in the form of tangible DISCs and then put them into people.[5] To do so, Whitesnake must touch its victim and take the time to physically "extract" the DISC from them; as such, partial extraction is ineffective.[6]

There are two main types of DISCs: Memory DISCs contain a person's memory and Stand DISCs contain a person's Stand. DISCs may be inserted into another person's head, allowing them to either freely consult the memories inside[7] or use the corresponding Stand, much like the original user. Pucci can use this mechanic to force a detrimental power into someone, for example putting a water-boiling Stand DISC inside Foo Fighters despite its dependency on the water to survive.[8] In certain instances, those with inserted DISCs can eject them, presumably through enough force to the head.[9][10]

People whose Stand and Memory DISCs are extracted will fall unconscious[5] and may die, their bodily functions stopping and having to be maintained through machines.[11] Putting a Memory DISC back inside their rightful owner will restore them,[7] however, the same does not apply with Stand DISCs.[2] A Stand User with only a Stand DISC can regain consciousness and be capable of learning, but the loss of their will to live results in muscle atrophy and eventual death of the body.[12] Weather Report is an exception to this degradation for unknown reasons.

Whitesnake also demonstrates the ability to insert and extract DISCs of miscellaneous use. DISCs can contain instructions the host will instinctively obey without question,[13] and enables them to do seemingly impossible feats like exploding, showcasing the power of suggestion over a physical body.[14] Pucci has also inserted a music CD into Guccio's head, causing him to function as a music player.[15] Whitesnake is shown to be able to extract senses, depriving Pucci of his sight, for instance, to protect him from Heavy Weather. 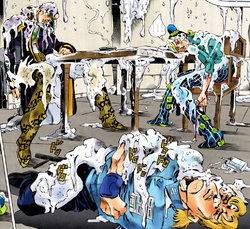 Melt Your Heart[1] is Whitesnake's ability to produce an acid that slowly digests objects like stomach acid.[16] It is first shown to constantly exude this acid and even take a partially molten form to hide,[4] though this is only used once. While dissolving, targets of this attack are distracted in a delusional dream-state. A person trapped in the dream may wake up from it by noticing discrepancies between the dream and established reality.[17] The melting portion of the ability requires a significant amount of time to use effectively, reflected in the "D" in its speed parameter.[1] Later, Whitesnake is shown creating sophisticated illusions to disguise itself as other people, having at one point impersonated Weather Report to ambush the Joestar Group and approach the Green Baby.[18]

In order to distinguish his voice for Whitesnake from his Pucci voice, Pucci's English voice actor, Yong Yea, uses Patrick Star from the SpongeBob SquarePants series as a reference.[19]