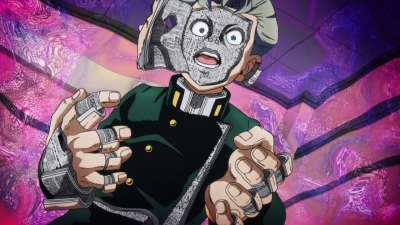 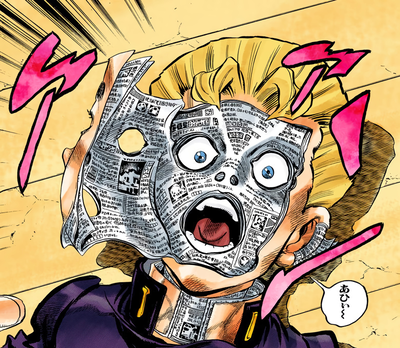 It narrates the meeting between Koichi, Hazamada and the notorious mangaka Rohan Kishibe, who tries to force Koichi to stay near him and exploit the boy's everyday adventures as material for his manga.

Rohan appears to pre-empt their arrival, and displays many eccentric and/or disturbing traits during their meeting.[1]

When Toshikazu and Koichi sample Rohan's newly finished work, they are struck by Rohan's new Stand Heaven's Door; transmuting their bodies into rolls of paper, covered in text revealing detailed information about their lives, experiences, and personalities.

From Koichi, Rohan learns of the existence of Stands besides his own. Sympathetic to Koichi, Rohan targets him, erasing his memory as to his exploitation so as to enable him to study his memories again. Toshikazu is deemed useless as material and dismissed.[2][3]

Koichi finds himself returning Rohan's house the next day as Josuke and Okuyasu coincidentally observe. Having seen an accidental wound on Koichi's hand, Okuyasu enters through Rohan's window, before he is also struck by Heaven's Door and immobilized.[4]

Finally, Josuke hears the confrontation from outside Rohan's door; opting to confront him with his eyes closed so as not to be exposed to the Stand. Rohan is violently defeated after an attempt to make Josuke look at him by taunting him about his hairstyle.[5]

In response to Rohan's confusion, Koichi iterates a story Josuke gave him on the meaning of his hairstyle; originally belonging to his unnamed childhood savior.[6]