Kyo Nijimura (虹村 京, Nijimura Kyō) is a side character featured in the eighth part of the JoJo's Bizarre Adventure series, JoJolion. Appearing as an antagonist in the "Paisley Park and Born This Way" story arc, she then becomes a neutral character.

Kyo is the Higashikata Family household's housekeeper. She is eventually revealed to be the daughter of Holy Joestar-Kira and thus Yoshikage Kira's younger sister. Kyo is a Stand User who wields the autonomous, chilling Stand, Born This Way.

Kyo is a beautiful young woman with long, black hair which is normally tied in a bun with the exception of her meeting with Josuke with her hair down.

Her pantyhose are patterned with stars, and her shoes were designed with a bow-knot.

Since "Nijimura" is merely an alias, her true last name is likely either "Joestar" or "Kira". 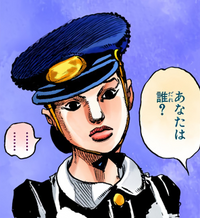 Kyo as an emotionless maid

Kyo typically performs all the duties expected of a maid and shows no emotion whatsoever. It is eventually revealed her emotionless demeanor is a facade when Josuke asks her if she attacked him on the Higashikatas' orders. Kyo reacts harshly to this, showing that she hates the Higashikatas, calling them "the goddamn Higashikatas". She also threatens to kill Josuke if he approaches Holy, apparently out of more personal reasons, shedding tears and becoming more emotional.[3]

After Josuke finally gives into her demands, she breaks down and reveals that they knew each other in the past, and she is surprised that he has really lost all of his memories. She also points out the seams in his halved eyeballs and tongue.[4]

Kyo's Stand Born This Way is an automatic Stand that activates when the person she has targeted opens something. It manifests as a humanoid Stand riding a motorcycle that produces extremely cold winds, capable of freezing water vapor in the air.

Kyo as a child

Kyo is born from the union between Holy Joestar-Kira and Yoshiteru Kira, and she is Yoshikage Kira's little sister.

Although aware of her mother's illness, Kyo took no part in helping Yoshikage steal and keep the Locacaca from the Locacaca Smuggling Organization. Instead, wary of the Higashikatas, she infiltrated the Higashikata Family, posing as an unrelated maid and taking the name "Nijimura" to investigate their secret.

After the earthquake of March 11, Kyo discovers the supernatural properties of the soil near the Wall Eyes, which can exchange parts between two buried objects.

Upon entering the Higashikata household, Josuke Higashikata is coerced into taking a family photo. Kyo appears and attempts to remove his hat, causing Josuke to feel threatened, and ask who she is. Norisuke Higashikata IV answers for her and introduces her as the Higashikata family's housekeeper. When Norisuke shows Josuke around the house, he tells him to ask Nijimura for anything he needs. Later, as she helps Yasuho Hirose exit the premises, she relays a message from Norisuke, stating that Yasuho is not allowed near the Higashikatas' house again.

Seeing that Josuke has investigated her family tree and taking him for an enemy, Kyo unleashes her Stand, Born This Way, on Josuke just as he decides to go see Holy. Nonetheless, Josuke escapes Born This Way and surprises Kyo standing near the hospital. Kyo tries to summon Born This Way one last time by tossing an opened pen to Josuke but Soft & Wet knocks her out before it can attack. Josuke manages to defeat her, but Kyo stays aggressive and warns Josuke not to approach her mother. Josuke decides to be diplomatic and concedes, leading Kyo to trust him. Examining his face, Kyo notices that Josuke's eyes and tongue are in fact a blend of two organs.[4]

Kyo subsequently leads Josuke to the Wall Eyes and shows him that he is a fusion of her brother Yoshikage Kira and another person. She demonstrates using a lemon and a tangerine, burying them underneath the soil. She then unearths the fruits and then slices each of them in half, showing some of their sections swapped.

After Jobin returns from his trip, he gives souvenirs he's bought from the trip to his family, including Kyo and Josuke. He gives Kyo an Oscar statue from a trip to Southeast Asia, which Hato grows jealous of.

When Hato brings her boyfriend Tamaki Damo home, Kyo is the first to be liquefied by Damo's Vitamin C as she tries to wipe off strange hand prints on the windows and furniture of the house. She spends the rest of the fight in a liquefied state.

Kyo is seen missing in the Higashikata family photo first taken during Jobin's visit to the family.[5][6] It is unknown if she was purposely erased from the photo for reasons yet to be revealed.