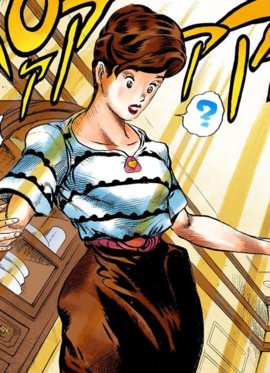 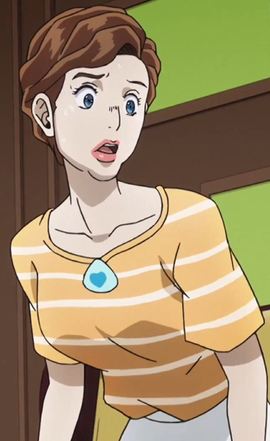 She is the wife of Mr. Hirose and also the mother of Ayana Hirose and Koichi Hirose.

Mrs. Hirose has short dark hair, styled as a side swept pixie cut

. She has moderately thick eyebrows and eyes that appear similar to her son's. She is always seen with lipstick and also wears earrings when going shopping in the manga.

Her initial outfit consists of a striped buttoned T-shirt along with a skirt and slippers. A small triangle-shaped brooch with a heart design is on the front of her shirt below her neckline. When going shopping, Mrs. Hirose carries a purse and wears a vest on top of a long sleeve shirt with light pants.

Koichi's mother is an energetic woman. She is cheerful and appears friendly to any stranger, as shown when she allows Tamami Kobayashi into her house,[3] compliments Rohan Kishibe, and gets along with Koichi's friends.[4]

She frequently goes to the hair salon called Salon Glance and calls her son Ko-chan. Mrs. Hirose can be slightly gullible, as she is tricked into believing Tamami's lies.[3] When her guilt is amplified by The Lock, it drives her to the point of wanting to commit suicide because she couldn't handle having raised a son who would steal money and stab someone. However, her faith in her son frees her conscience because she knows Koichi would never harm anyone.[5]

Mrs. Hirose and Ayana are out shopping when they stumble upon Koichi and Rohan. Surprised to meet a famous mangaka, she calls him amazing and requests to come with them to Kameyu Department Store. Yukako is frustrated that of all people, Koichi's mother had to show up because she had hoped to be alone with Koichi.[4]